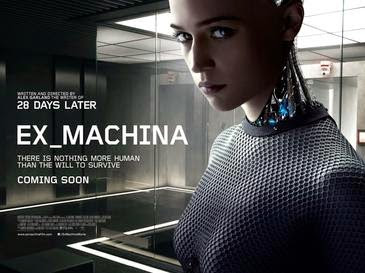 Alex Garland’s directing debut, Ex Machina, is an immersive experience. It’s set in the sleek, up-to-date-with-a-vengeance compound of an eccentric young tech tycoon named Nathan Bateman. Nathan is the creator of the world’s most popular search engine (Bluebook, or, by very little twist of the imagination, Google); he’s played by Oscar Isaac. Nathan is working on something new and exciting: a sentient robot named Ava (Alicia Vikander), and he has picked one of the grunts from his company, a coder named Caleb (Domhnall Gleeson) to test Ava's abilities in a series of sessions.

Ex Machina is incredibly well-crafted. The set design is elegant yet spare, and sinister in its minimalism because it has the air of futurism, like something from a Stanley Kubrick film. When Caleb wanders through the seemingly endless corridors of Nathan's home-cum-research bunker, it’s like he’s been invited into Willy Wonka’s chocolate factory, where any minute a strange creature may emerge, totally at home with the inner-workings of the facility. The entire place is under surveillance and engineered with sophisticated security devices; and in order to travel from room to room, you need a specialized card that knows which rooms you can and cannot enter.

The conversations between Caleb and Ava are also well-dramatized. Garland has figured out how to make us gradually accept the humanity of an automaton, and even as you can hear the film’s frightening warning—that the actualization and immersion of AI into our culture is an inevitability with potentially startling consequences—you can find yourself bowled over, mesmerized, by the sheer achievement, the amazing simulation of humanity that Ava represents.

Garland also keeps the true intentions of his characters ambiguous. We never know if Nathan is pulling one over on Caleb or not, and as the film develops (and this is pretty evident in the film’s trailer), the proceedings become increasingly tense and dark. The film is predictably suspicious of young techie millionaires. Nathan's isolationism seems like a pretty good sign that he’s gone off the deep end: an arrogant, dangerous concoction of his own power, wealth, and genius. Caleb gushes at the beginning of the film that Nathan's achievement is the sign of gods at work, and Nathan later twists these words: “You said I was a god.” This is a luxury that the very wealthy can afford.

Unfortunately, Ex Machina beats to a rhythm of dread which never quite crescendos the way you want it to. The final revelations of the plot are satisfying thematically but cruel and in some sense deeply unsatisfying. Even though everything that happens feels well-thought-out and credible (I’m trying very hard to dance around spoilers for those of you who have not seen it yet), I was mad at the movie when it was all over. And yet, I believe Garland has hit on something very unnervingly honest about our obsession with machines and how easily we trust them to do what we tell them to do, how vulnerable we are to their corruption or malfunction. Even something as slight as a power failure becomes a serious problem at Nathan’s compound, because when the power fails, all the doors are sealed, trapping a person inside.

But Ex Machina succeeds overall because it is an elegant, deliberately paced thriller and we so seldom get movies like this anymore. Perhaps it could have been a little more exciting, but I think viewers with patience will enjoy the totally immersive experience that Alex Garland has crafted. The actors of course help shape the drama, and Oscar Isaac is the most magnetic of the three. He has a terrific knack for balancing the playful and the devious, keeping us always on alert, but never sure, about what he may or may not being up to. As Ava, Alicia Vikander is quiet, graceful, pensive. I'm not sure what I would expect from a performance for this type of character, but Vikander's certainly works and adds its own level of depth--and ambiguity--to the dramatics. Gleeson, as Caleb, works too. He's got the right blend of nerdy tech kid in hoodie and competent, resourceful hero/romantic, one who may be falling in love with a robot.

Ex Machina actually feels just a little connected to, of all things, Halloween III: Season of the Witch, the one that wasn’t about Michael Myers, but instead showed us a mad Irish toymaker who had murderous robots running his factory. And here, we may as well throw Westworld and The Stepford Wives into the conversation. There's a scene later in the film of a robot stabbing a human, and my mind immediately returned to Stacey Nelkin--whose character has been turned into a robot, or maybe was a robot all along--attacking Tom Atkins in the car at the end of Halloween III. As sophisticated as Ex Machina is on the surface, it espouses the same fundamental distrust of technology which all of these previous films dramatized and turned into extremely literal horror pieces. Ex Machina manages more subtlety, more panache, and yet it's not really any more sophisticated essentially. It ultimately resorts to the admonition, “The robots will kill us all.”
by Jacob Lusk @ pannedreview
Email ThisBlogThis!Share to TwitterShare to FacebookShare to Pinterest
Tags 2015, Alex Garland, Domhnall Gleeson, Oscar Isaac