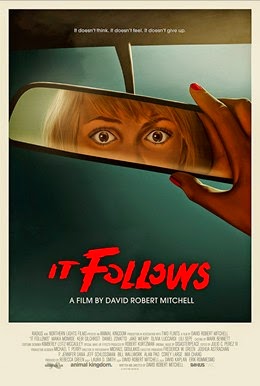 It Follows practices the economy of banality. It looks low-budget, but that may be more of an accented touch than an actual financial circumstance. It’s placid and monotone in the way unimaginative horror films from the 80s were, except at the heart of the film is a pretty funny notion, riffing on the criticism certain viewers charged at slasher movies thirty years ago where the sexually active youngsters were always being killed off in a fit of puritanical judgment: a demonic, indefinable thing is passed on via sexual intercourse, and it pursues its target with unwavering perseverance. It's the sex-as-death- wish threat writ large.

The film is set in the cinematically appealing drabness and rot of Detroit, where a group of teenagers bands together to protect the heroine Jay (Maika Monroe), who’s being visited by this STDemon with a vengeance. Of course, only she can see the thing, which stalks her in the form of various dead people (men, women, old and young; it changes forms almost every time). Her friends believe her though, and director David Robert Mitchell zeroes in on the tight-knit closeness that develops as a result of the uncanny predicament in which Jay finds herself. (Like all good cheesy horror movies, this film exists in a world populated by adolescents who are latch-key kids: their parents are conveniently aloof and they are forced to deal with their supernatural-sexual problems on their own.) Mitchell’s sense of what makes a horror film work is admirable: It Follows has plenty of moments to make the flesh creep. It’s also one of the few horror films in recent memory that doesn’t blatantly refer to other horror films, although in a sense, it’s just one long reference in and of itself.

Mitchell seems intent on making a virtue of the unimaginativeness of those horror movies that his generation grew up on. But in spite of the film’s monotone blandness aesthetically speaking, and despite the characters’ blasé attitudes, the movie is a shrieking good time in parts. Mitchell’s a hipster filmmaker (his sense of period detail is deliberately ambiguous: the kids watch TV on big, bulky sets, use phones with cords, but there are still cell phones, and one girl has a sea shell-shaped e-reader on which she reads Dostoyevsky’s The Idiot); he's infatuated with his clever detachment, perhaps too content in the knowledge that he "gets" what makes a horror movie fun. And yet, the problem I have had with horror movies lately is that none of them seem interested in showing us a good time. Just watching the previews for It Follows confirmed this: it was one child-in-peril-via-supernatural-forces after another, including a needless Poltergeist remake.

It Follows scores a lot of points for being simply enjoyable, and quite deliberately simple, the way that Halloween is. I think Mitchell may be selling himself short in terms of filmmaking, especially if the thing is a massive hit and he’s stuck making one It Follows after another for the next ten years. But it will be interesting to see where he goes as a director, because he’s able to do a lot with very little, and we truly do feel for these characters. With Keir Gilchrist, Jake Weary, Daniel Zovatto, Olivia Luccardi, and Lili Sepe.
by Jacob Lusk @ pannedreview
Email ThisBlogThis!Share to TwitterShare to FacebookShare to Pinterest
Tags 2015, David Robert Mitchell