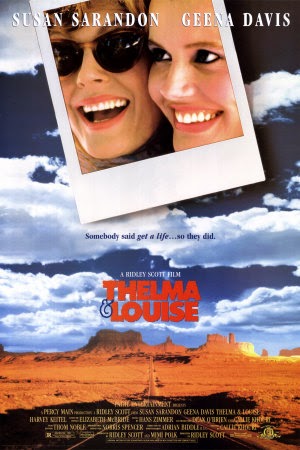 A blockbuster about the friendship between two women is rare. Not because they can’t make money, but because studios think of them as risky. Thelma & Louise (1991) isn’t always successful as a movie, but it is successful as a study of two women who’ve been burned one too many times by the men in their lives and the men who run the world. Thelma and Louise take it on the lam after unexpectedly committing murder (that of a rapist pig) and most of the film dramatizes their trek through the West toward Mexico as the police struggle to keep up with them.

Susan Sarandon and Geena Davis are perfectly cast, and it is their performances and the bond that develops between these two characters that breathes a real vitality into what is really a very conventional Hollywood road movie. It’s nowhere near as groundbreaking as Bonnie and Clyde was in terms of violence, and yet, it’s tremendously groundbreaking in the way it portrays women who, once they’ve tasted freedom from the shackles of their former lives, finally start to feel alive. It’s somewhat surprising to see a movie like Thelma & Louise come from a director such as Ridley Scott, even though he did give us such a strong female character in Alien (Sigourney Weaver’s Ellen Ripley). But this is a different, deeper approach to exploring the lives of women on the screen, and the film is bolstered by many loose scenes of the two ladies talking, laughing, or in some cases, just looking at each other and communicating whole worlds of expression. That dynamic is what makes Thelma & Louise an important film, even if the parts of the movie are better than the whole. The affection that we as an audience feel for them is also very deep and true, and, like Bonnie and Clyde before it, the film thus succeeds in getting its audience to root for the “bad guys.”

So much of what happens to Thelma and Louise is filtered through a lens of experience that is all too believable: Women are not just bossed around by men, they’re controlled by them in a much deeper way that creates in some women a need for the prisons that men create. They become victims of Stockholm Syndrome, if you will. We see it in the early scenes of Thelma & Louise, especially with Geena Davis’s character, whose husband neglects her, mocks her, and belittles her, and demands domestic labor of her, all the while carrying on affairs.

As the movie progresses, the two women transform from their dowdy, frumpishly dressed former-selves, so weary of the world, into more confident, sexually aware (but not self-exploitive) and powerful women. Susan Sarandon never looks more radiant than with her hair framing her face or blowing in the wind as she pounds away at the dusty highways of the American West. And Geena Davis's Thelma, who is so inept at first and so afraid to do anything that might exercise her own agency, becomes incredibly self-assured. These transformations are indeed fascinating, and they make the film’s legendary ending all the more poignant and, strangely, satisfying.

Thelma & Louise actually has more in common with Butch Cassidy and the Sundance Kid. It is after all a buddy movie that tries very hard to transmute its tragic elements into comedy. (In the case of Thelma & Louise, this works intermittently, more consistently in the last half of the movie.) With Harvey Keitel as an Arkansas cop investigating the murder and subsequent flight of the two suspects; Brad Pitt as a sweet-talking hitchhiker; also Michael Madsen, Christopher McDonald, Stephen Tobolowsky, Timothy Carhart, Jason Beghe, and Marco St. John. Written by Calli Khouri; music by Hans Zimmer; cinematography by Adrian Biddle.
by Jacob Lusk @ pannedreview
Email ThisBlogThis!Share to TwitterShare to FacebookShare to Pinterest
Tags 1991, Brad Pitt, Geena Davis, Harvey Keitel, Michael Madsen, Ridley Scott, Susan Sarandon