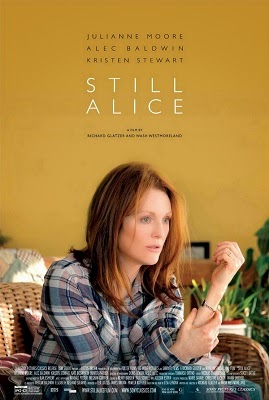 In Still Alice, Julianne Moore triumphs in a role that would be tempting to write off as a pointed Oscar grab. Moore’s performance—as Alice Howland, a successful linguistics professor who is diagnosed with early-onset Alzheimer’s Disease—is haunting and complex, showing us the progression of a disease in a very believable way without sacrificing the dignity of her character. Still Alice might have been the kind of middlebrow message movie that the Oscars delight in, except for the fact that its treatment of Alzheimer’s disease is raw and authentic. The movie doesn’t strain for prestige as much as we might expect. Instead, it weaves compelling scenes together of Alice the successful intellectual (author of noteworthy books on language development), Alice the happy wife (married to a fellow academic, played by Alec Baldwin), and Alice the mother of three grown children (played by Kate Bosworth, Hunter Parrish, and Kristen Stewart), who struggles with a disease but is not defined by it.

If we have to sit through a movie as depressing as Still Alice, I’m glad we can do it in the company of the great Julianne Moore. (Granted, I’m biased. She is one of my favorite actresses, and I was more than a little adamant that she deserved an Oscar for this performance even before I saw the movie.) And yes, Still Alice is a tough movie to watch. Few films released in 2014 so boldly stared viewers in the face with their own mortality. How many of us have loved ones who struggle with this and other diseases which seemingly erase their personalities, taking them from us long before their bodies give out?

The writing-directing team of Still Alice, Richard Glatzer and Wash Westmoreland (who adapted Lisa Genova’s novel of the same name), understand how to make a movie about human suffering and frailty without giving in to the temptation to preach or pander. Of course, viewers are likely to experience a “Niagara Falls” kind of emotional reaction to this movie anyway. This is a movie that will break your heart, not the least of which because it feels like we’re watching Julianne Moore develop Alzheimer’s. That is probably the hardest thing to take: seeing an actor you love suffer on the screen in such an urgent and real way. But because Still Alice is honest, and because its emotional wallops are never cheaply constructed, its melodramatic content works beautifully, the way tearjerkers should.

Emotions are such tricky things, and Hollywood movies so often falter when they try to dramatize the real emotions people feel. Still Alice gets at the complexity of those emotions for all the members of Alice’s family. We see the panic in Alice’s children when they are confronted with her disease; we see the denial and cowardice (and self-loathing) of her husband, who at the beginning assures Alice that he will stand by her, never believing just how costly this struggle will be; we see Alice, bravely speaking about her illness at an Alzheimer’s convention, using a highlighter to follow the lines of her speech. (In a prior scene, her youngest daughter, an aspiring actress living in L.A. who’s played by Kristen Stewart, suggests—via Skype—that her mom’s speech is too technical, not personal enough; Alice angrily ends the chat and turns away, frustrated at how difficult the task of writing has become; but she reworks the speech, and the movie doesn’t feel the need to show her revision process: we get it in the delivery itself, and it’s moving and inviting. If a movie must offer a kind of TED-talk presentation on a degenerative illness, the way Still Alice does so is the most effective, the most poignant method: humanizing, sympathetic, not self-pitying or self-absorbed.)

I had a hard time convincing anyone to see Still Alice with me. And it’s no wonder. How do you recommend a movie like this—even when it’s so, so good—when you know people are going to be sad watching it? At some level, we go to movies like Still Alice for catharsis. The emotional intensity of the material demands that we confront our own fears. Perhaps the most honest thing Alice says is about the way this disease assaults her very identity, which is so wrapped up in her success as a professional thinker. Still Alice doesn’t try to explain this injustice. It confronts the tragedy—and the beauty—of human existence. And believe it or not, the movie isn’t a total bummer. “How can you call my life tragic?” Alice wonders. “I’ve had a successful career, a happy, stable marriage, three wonderful children” [I’m paraphrasing].”

So, go see Still Alice, even though you are going to be sad, during and after. But let the intense gratitude of the film wash over you as much as the sorrow. My favorite moment in Still Alice occurs during Alice’s speech at the convention, when she quotes that lovely poem “One Art” by Elizabeth Bishop, giving it a new kind of heartbreaking and beautiful meaning. I think I’ll close with it.

BY ELIZABETH BISHOP
The art of losing isn’t hard to master;
so many things seem filled with the intent
to be lost that their loss is no disaster.


Lose something every day. Accept the fluster
of lost door keys, the hour badly spent.
The art of losing isn’t hard to master.


Then practice losing farther, losing faster:
places, and names, and where it was you meant
to travel. None of these will bring disaster.


I lost my mother’s watch. And look! my last, or
next-to-last, of three loved houses went.
The art of losing isn’t hard to master.


I lost two cities, lovely ones. And, vaster,
some realms I owned, two rivers, a continent.
I miss them, but it wasn’t a disaster.


—Even losing you (the joking voice, a gesture
I love) I shan’t have lied. It’s evident
the art of losing’s not too hard to master
though it may look like (Write it!) like disaster.
Elizabeth Bishop, “One Art” from The Complete Poems 1926-1979. Copyright © 1979, 1983 by Alice Helen Methfessel. Reprinted with the permission of Farrar, Straus & Giroux, LLC.