Solaris, and Some Thoughts on Foreign Films 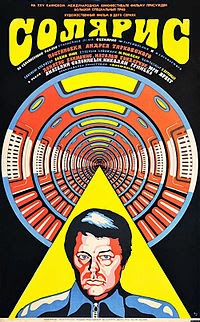 I can still remember the unmitigated agony of watching my first “foreign” film. (I employ the use of quotation marks because, somehow, the word feels like an American vulgarity, a dismissal of anything cinematic which did not issue from within our own borders.) The movie in question was Roman Polanski’s nightmarish psychological thriller Repulsion (1965), of which I’d read promising things. Leonard Maltin, in his giant annual movie guide, had given the film four stars and praised it as a classic of the horror genre. I loved horror movies. The title sounded intriguing. And how many horror movies got four stars? So when I finally encountered the movie, I was more than a little disappointed by how strange and dull it seemed. I think it nearly put me off foreign films for good. But at the time, IFC was showing a lot of them, and I somehow found myself watching another renowned Roman Polanski film, Knife in the Water, which I found equally insufferable.

Looking back on it, I realize that what I needed was my own personal foreign film curator: someone to gradually introduce me to world cinema and help me understand that I was used to American sensibilities, which were different from say, European, sensibilities. Watching foreign movies isn’t all that different from visiting a foreign country. It helps to familiarize yourself with the customs of the people first. Going in cold can feel like a freefall through an enormous vacuum of space.

It doesn’t help that so many critics write and talk about foreign films as the art of the enlightened, movies you either “get” or you don’t. Those who are lucky enough to “get” them do so because they’re smart and hip, and the rest of us are hopeless buffoons in the world of art, wandering the museum with childish restlessness and mispronouncing the names of the painters. And that is true to a degree, because I entered the world of foreign films as a complete naïf. I was too stupid to watch a Roman Polanski film, except maybe one of his English-language ones like Rosemary’s Baby.

The good news is—I think—I did not stay stupid. Gradually, as I challenged myself to watch more films in other languages, I began to understand them better. It’s taken me a while, and there are still moments of genuine mind-numbing cinematic agony, like when I sat down to watch Godard’s Weekend (1967), which is the single most excruciating foreign-language film I’ve ever watched. But then there were also surprises. Happy surprises, like Bertolucci’s The Conformist. I remember watching it and being slightly disinterested, but then, as a day or so went by, feeling that the movie had begun to improve in my mind. Those images, so beautiful, held immense power over my memory. It was like the first time I tasted the things in the red wine that the label told me I was supposed to taste. My appreciation had turned into enjoyment, almost instantly, although really it had been a process of time and gradual understanding.

My advice for people who are challenging themselves to delve into the world (or is it worlds?) of foreign films is: Don’t demand too much of yourself as a viewer (at first), but also don’t stop challenging yourself. We don’t have to like a movie just because the Criterion Collection has released it in a beautiful new edition. (Their artwork turns me into the biggest sucker, paying thirty dollars for movies I haven’t even seen because of the gorgeous cover designs.) However, it is not always the movie’s fault that we don’t like it. Sometimes, it really is us. Our own response to a given film is dependant on so many things including our moods, our expectations, the setting in which we’re watching the film, as well as our own knowledge and love of art and literature.
—
Andrei Tarkovsky’s Solaris (1972) is a nearly-three-hour-long Russian science fiction film. (It’s based on a novel by Stanislaw Lem; it was remade in 2002 by Steven Soderbergh and starring George Clooney.) I’ve been wanting to watch Solaris for years, but that running time, and the almost insurmountable certainty that I was not going to have a good time, held me back. With this in mind, I decided to watch it in sections. And I also decided not to expect anything riveting. This is a movie set mostly on the fictional planet Solaris, but the movie spends 45 minutes meandering on earth.

Somehow, the film’s slow pace and calm, contemplative nature work for it. You find yourself pulled in as the main character, a scientist named Kris Kelvin (Donatas Banionis), visits a space station on the planet Solaris, where his colleagues have been experiencing some decidedly strange phenomena. Namely, people long dead are walking around the station. People they know. When Kris arrives, he sees his dead wife (Natalya Bondarchuk) wandering the station’s quiet, eerily winding corridors. His reaction isn’t an eruption of joy or grief or anything. He’s almost unnervingly calm, and then, as he begins to understand what’s happening and why, we are pulled even deeper into this strange, haunting, beautiful, and yes, sometimes boring, film.

What is the cause of this seemingly supernatural occurrence? What does it all mean? What are the limits of human consciousness and the self? These are some of the questions Solaris asks. The film doesn’t rush to conclusions, preferring instead to linger with the questions. This may sound like a lot of philosophical, arty, naval-gazing. And perhaps viewers will find it hard to care about such questions in a movie that runs so long. But Tarkovsky’s images are compelling in and of themselves without all the philosophy.

The best science fiction movies allow us to enter a world and really take it in. We’ve become so accustomed to the flashy thrill ride pictures of sci-fi that may be partly the product of Ridley Scott’s and James Cameron’s early work (Alien, Blade Runner, The Terminator and Aliens). Hollywood sci-fi movies can create interesting worlds, but too often we spend very little time contemplating these worlds. (Or, the world is so grim and depressing that we wouldn’t want to spend any time thinking about it, let alone actually inhabit it.) Scott’s Alien is indeed (as I’ve written before) a masterpiece of deliberate pacing. Terminator and even Aliens to a lesser degree have a kind of brilliance to them in their cheap, big-movie aesthetics. They’re both entertaining films. Blade Runner, which is a convoluted mess, may be the closest in tone to Solaris, but that’s mainly because they’re both very slow-moving films. But what makes a film like Blade Runner so dull and a film like Solaris so interesting despite its slowness? (I should add that many people find Blade Runner to be a great film; I offer it up for comparison partly for that reason, and partly for the reason that I find it incredibly tedious.)

Solaris works because of the questions behind the imagery, anchoring the film. Blade Runner, which does ask similar questions about what defines humanness (the replicants in Blade Runner begin to take on human emotions just like the human “manifestations” in Solaris), doesn’t hold up at the root. It’s essentially a shallow piece of filmmaking, with garish aesthetics tacked on to give it the semblance of grand, “important” art. Solaris, which is a spare, simple production on many levels, doesn’t try so hard to be gaudy art. As arty as it is, it’s easier to take on its own terms than a film like Blade Runner. Both are visually grand; only one has any real depth to it.

There is real human feeling in Solaris, and that is the ingredient which some of our own genre pieces have failed to achieve. If a world like Solaris is capable of regenerating human forms, does it matter if they aren’t really the people we once knew? Or, are they the people once knew? I love the mysteries embedded in these questions. The emotions conjured up in Solaris are powerful, like reading a line of poetry that breaks your heart. Indeed, Solaris is maybe the most poetic science fiction film. Stanley Kubrick’s 2001, which is a ridiculously self-important, inflated piece of moviemaking that I kind of love anyway, strains for poetry but doesn’t always achieve it. Solaris doesn’t have to strain for anything. Yes, it’s asking big questions and yes, it’s an arty movie, but somehow, these aspects never feel like superficial props. Tarkovsky is not trying to manipulate us. He’s wondering (and wandering) out loud, and inviting us to come with him.
by Jacob Lusk @ pannedreview
Email ThisBlogThis!Share to TwitterShare to FacebookShare to Pinterest
Tags 1972, Andrei Tarkovsky