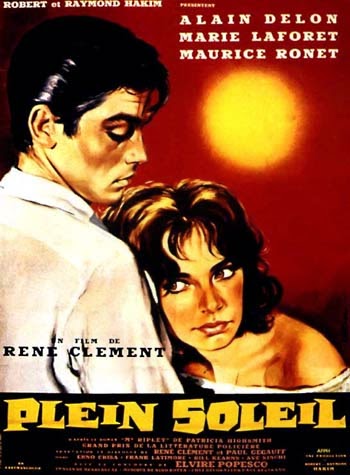 Tom Ripley (Alain Delon) is a loafer and a sponge, but he’s also poor and undistinguished; luckily, Tom is very clever, so when he’s sent to Rome to corral his old friend Philippe Greenleaf (Maurice Ronet), whose millionaire father wants him back home in America, their friendship revives in their mutual understanding that Philippe has no intention of honoring his father’s wishes. They spend their time idling around Rome together, sailing together, and chasing girls together. But Philippe knows that Tom is not a true friend; Tom is an interloper and an opportunist, a man who will pursue his own personal gain at all costs. This is the setup for René Clément’s Purple Noon (Plein Soleil, 1960), a beautifully shot adaptation of the 1955 Patricia Highsmith novel The Talented Mr. Ripley. (Anthony Minghella remade it in 1999 under the original title, and cast Matt Damon and Jude Law in the leads.)

Clément and his cinematographer, Henri Decaë, turn a decidedly unpleasant plot into a gorgeous-looking movie set along the sun-baked Mediterranean. It’s hard not to be taken with this film’s visual beauty; it’s also hard to take your eyes off the bronzed, beautiful actors, and that may be the reason that Philippe, who sees through Tom Ripley’s act, allows Tom to accompany him even when he catches Tom wearing his clothes, or flirting with his girlfriend Marge (Marie Laforêt). It’s obvious that Tom is at the very least enamored of Philippe, if not in love with him. And Philippe, perhaps because he’s also something of an egoist, seems flattered by it even if he doesn’t reciprocate. He likes having a devoted follower, someone to envy him; it’s a relationship based on the kind of power Philippe has versus the kind of power Tom has: one of them has money, the other smarts. Tom is a trained observer of people, and he uses this ability time and again to gain information and get what he wants. 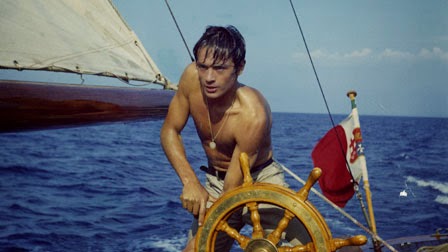 When I saw The Talented Mr. Ripley in theaters fifteen years ago, I was struck by the nastiness of the whole plot. Purple Noon somehow manages to subvert that nastiness much more effectively. The moral decay at the core of this story is deliberately at adds with the enchantment of the Continent. Purple Noon is lighter in tone that the 1999 remake. While we’re never fully sympathetic with Tom Ripley or his designs, Clément still makes us identify with him. We fall under his spell too, even though really he’s not as charming as we think. He’s good-looking and ruthless. He knows exactly what to do, what to say, how to act. These are the chief talents of Tom Ripley. The remake turns him into something psychologically perverse: he’s a disturbed weirdo. In Purple Noon, he is a selfish bastard. It's the simplicity of it that makes Purple Noon the better film: it's a movie, not a psyche evaluation.
by Jacob Lusk @ pannedreview
Email ThisBlogThis!Share to TwitterShare to FacebookShare to Pinterest
Tags 1960, Alain Delon, Maurice Ronet, René Clément