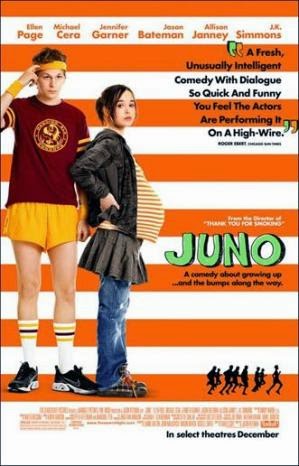 Watching Juno (2007)--for the first time--reminded me of all the other independent movies I saw during the first decade of the 21st century, and how they all had a kind of disaffected, ironic tone to them. This was a trendy way to make movies in the decade of the 2000s, perhaps as a reaction against Hollywood’s big dramatic escapist gestures of the 90s, like Titanic or Braveheart or Saving Private Ryan. I’m not quite sure what it is that made so many independent films between 2000 and 2009 have this quality of resistance to direct emotion, but suddenly it was not cool for movies to have feelings unless the characters were fully “aware” of what they were feeling and how they were feeling it. Moreover, all of these indie films took on a hipsterish quality, embracing everything that was aesthetically vintage, and indeed the ironic tone of which I speak is pretty hipsterish in and of itself. It made for an interesting if underwhelming spate of films such as Donnie Darko, The Life Aquatic, The Door in the Floor, Garden State, Napoleon Dynamite, Sideways, Junebug, The Squid and the Whale, Away We Go, and (500) Days of Summer. I hated a lot of these movies (and loved a handful of them), and now that we seem to have gotten over this period of disaffectedness in movies (I mean, last year’s The Immigrant was absolutely in touch with its emotions, and 2013’s Frances Ha, which did embody some of these qualities to a degree, wasn’t ashamed of letting you feel for its heroine), it seems like a good time to go back and take stock of them. What was going on in these films? What was it that, despite the fact that independent films are supposed to be known for their stunning originality, made them all feel like slight variations of each other? (I hope to explore more of them in the coming months, but for now I'll focus on Juno.)

Juno absolutely embodies these trendy-indie qualities. The film’s writer-director, Jason Reitman, has created a character who seems almost unreal in her self-awareness. Juno, played by Ellen Page, is a teenager who gets pregnant in high school and then decides to have the baby and give it up for adoption—to a loving, wealthy suburban couple played by Jason Bateman and Jennifer Garner. Juno waltzes through the movie with a cutting, self-deprecating sense of humor, her armor against a world that has presumably proven itself again and again to be a place of disappointment. For the first hour or so I found her incredibly grating. (Chief among my complaints was the dialogue, as Juno says a lot of stupid phrases like “do me a solid” that feel like a middle-aged person trying to write youthful dialogue and missing the mark.)

Worse yet was the hipster-music soundtrack. Every song was precious and felt like bad folk tunes merged with bad high school band music (ala Sufjan Stevens). These songs are of the cutesy and vintage variety, and this was a particular annoyance to me, because it felt like the movie didn’t want to experience any kind of direct emotion, not even in its music. Instead of having a score that would move the audience (which might be manipulative), the music instead coats every scene in a kind of superficial self-awareness glass cage, like the Pope driving in a motorcade encased in bullet-proof glass. Juno is prickly under the weight of all this armor, and seems unable to have a real conversation without a continuous self-commentary, like someone who berates herself so as to prevent anyone else from doing so. Reitman also can’t resist having his characters (namely Ellen Page and Jason Bateman) argue about their taste in music and movies, name-dropping directors and bands. At one point, they sit down and watch a Herschell Gordon Lewis splatter movie called The Wizard of Gore (on VHS, which is so hipster). There was also the critique of suburbia that is oh so easy for movies to make. But, the movie redeems itself in that area, because Reitman humanizes his characters (most of them), and doesn’t try to make some sweeping statement about all people living in suburbia (or anywhere, for that matter).

Halfway through the movie, my attitude toward Juno shifted because of a realization I had: Despite the “indie”-ness of this film, Jason Reitman does want his characters to feel things directly, and his story is actually quite sentimental and touching. But for some reason he felt compelled to lay all this hipstery independent-movie paraphernalia on top of the story, perhaps to make it feel less like a CBS movie-of-the-week, or one of those low-budget teenage abortion dramas from the 1970s. (Also, watching Juno really improved my feelings about 2014's Obvious Child, starring Jenny Slate. I think it's probably the better film.) So Juno is a faux-clever indie comedy-drama about teenage pregnancy that, underneath all its prickles and irregularities, is a truly affecting, winning study of human drama. The individual emotional crises of all the characters are well-thought-out and proportional; the problems between the married couple feel both believable and believably resolved (or is it unresolved?) at the end of the picture (Jennifer Garner, it should be noted, gives a terrific performance), and Juno’s journey of self-awareness actually achieves something: the too-smart-for-her-own-good protagonist does feel things, and can be affected by the people in her life. (And even though some of Juno's dialogue is irritating, there are many laugh-out-loud funny lines in this movie.)

Also, Juno isn’t nearly as cynical as its top layer would have us believe. Indeed, it’s a movie that wants to hope that people can be better than they are, without cleaning up all the mess in a specious, sitcom-like finale. I liked Juno in spite of itself at times, and if I could just change the soundtrack and some of Juno's inane dialogue, I’d probably be content with it. With J.K. Simmons (as Juno’s dad), Allison Janney (as Juno’s stepmom, who delivers a few good zingers), Michael Cera (as Juno’s best friend and baby daddy), and Olivia Thirlby (as her best girlfriend).
by Jacob Lusk @ pannedreview
Email ThisBlogThis!Share to TwitterShare to FacebookShare to Pinterest
Tags 2007, Allison Janney, Ellen Page, J.K. Simmons, Jason Bateman, Jason Reitman, Jennifer Garner, Michael Cera