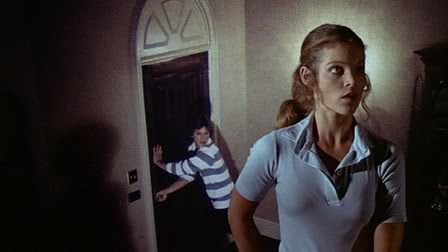 Of all the thrillers Brian De Palma made in the 70s and early 80s, The Fury holds the record for being the wackiest. Its loosey-goosey story involves youths with telepathy who are targeted by a secret government agency. The Fury has a terrific music score by John Williams. Williams’s music elevates the supreme goofiness of De Palma’s movie. (It was right around the time he was composing scores for Star Wars and Superman, and the influence is obvious, although the music is still distinct. It’s beautiful, emotionally big and evocative, and compelling.)

Kirk Douglas plays Peter Sandza, an ex-CIA agent whose son Robin (Andrew Stevens) has psychic abilities that the government wants to harness. So, they kidnap Robin after attempting to kill his dad while the two of them are vacationing somewhere in the Middle East. Then the film jumps a year ahead, to Chicago, where Amy Irving is strolling along Lake Michigan with her girlfriend, studying for an upcoming test. Irving’s character, Gillian, has the same kind of psychic powers as Robin, and a man—also possessive of these abilities—has procured her for the desperate Peter, who’s hoping Gillian can help him track down his son. 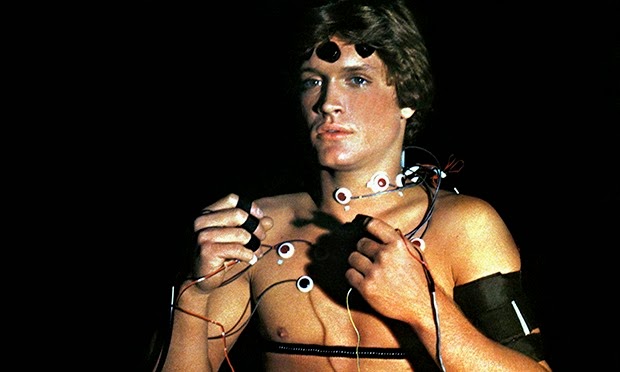 Robin, it turns out, is being held by the afore-mentioned ominous government agency, pacified by a sexy psychiatrist (Fiona Lewis) while the government tries to exploit him. Gillian makes several psychic connections with Robin when she goes to stay at the Chicago-based Paragon Institute, a facility that reaches out to people with these kinds of gifts. It’s run by two apparently sincere scientists played by Charles Durning and Carol Rossen, who know Robin because he stayed there once too (briefly).

The government learns of Gillian’s powers just as Peter does, so that it becomes a race to see who can get to her first, and whether or not Peter can track down his son and rescue him from the manipulative clutches of the powers-that-be.

I took the time of explaining the oddball plot of The Fury to point out that Brian De Palma, perhaps more than any director working in his genre in the 1970s, was a filmmaker committed to a kind of madcap expressionism. The movie glides along to that wonderful John Williams score, soaking in the sights of Chicago, humming along with all its bizarre plot points, and as illogical, incredulous and half-baked as much of it is, the thing is a hell of an experience. It’s not as iconic as Carrie, nor as freaky as Dressed to Kill, but it’s alive with energy, and De Palma pulls sincere performances out of everyone in the cast. The movie falls apart in the end, but fans of such genre-tripping nuttiness should definitely give this freak-out of a horror film a try. It's wonderfully cynical and made with an exuberant love of the genre. There are also some bonkers special effects—especially at the end—featuring bodily explosions. (These youths have a lot of pent-up energy.)