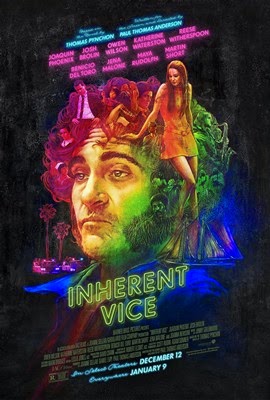 A tagline for Thomas Pynchon’s novel Inherent Vice theorizes, “if you can remember the 60s, you weren’t there.” That’s the project of Paul Thomas Anderson’s film adaptation: to dramatize the disembodied, drug-addled incoherence of an entire decade. The film takes place in 1970, and its star, Joaquin Phoenix, plays a private investigator named Doc Sportello (no stranger to recreational drug use himself). Doc is hired by his ex-girlfriend to check out her wealthy current lover’s wife, who may be plotting against him with her boyfriend. Doc’s investigation quickly gets derailed by all sorts of problems and strange encounters, and it isn’t long before he’s pitted against a conservative, hippie-despising L.A. detective played by Josh Brolin.

The plot—which is constantly being subordinated by the mood and the tone Anderson has worked so very hard to convey—sounds like a promising film noir, particularly one of the 1970s noirs, such as Robert Altman’s The Long Goodbye. The Long Goodbye is a cynical revision of the 1940s detective thrillers, showing us a Philip Marlowe who wasn’t the knight in shining armor, unless he was maybe a Don Quixote, oblivious to the reality that he no longer mattered. In a sense, this film may be Paul Thomas Anderson’s attempt to ape the style of Altman. But he isn’t as precise. Perhaps the film is too successful at what it wants to do: Its loose structure will either charm you or put you to sleep. (I fell into the latter category.)

I can only admire the craft and the intentions of a film like Inherent Vice for so long. Once that initial feeling of appreciation faded away, I began to look around the theater, check the time, and wonder how much longer my imprisonment would last. (The film runs two hours and 30 minutes.) But it’s not just the fact that Inherent Vice turns out to be a colossal bore of a movie. It’s also pretty dismally unfunny, and Anderson tries very hard to be funny at times. (There are a few minor laughs, but far too many scenes attempting comedy completely misfire.) Phoenix gets knocked around a good bit, and there are moments of outlandish chaos filtered through the relaxed vibe of people too zonked out on mind-altering dope to actually be as zany as Anderson would like. The director possesses an exuberant love of hippy culture, a culture he clearly aims to defend by showing us the moral decay of its enemies. But, in order to remain true to the overall feeling of Pynchon’s novel (one which I am guessing can be summed up in that earlier quote about not remembering the 1960s), Anderson has to ultimately hold himself a kind of hostage to nonsense. He takes a few cues from The Big Sleep there, because nothing in that movie made much sense either. But damn if it wasn’t entertaining and fun from beginning to end.

Part of the problem is the film’s tendency to dump information on the viewer while doing so in a lulling sort of way. Characters appear and divulge more and more apparently unimportant information, as none of it ever really adds up. When Doc visits a mental institution—where his ex-girlfriend’s lover has been spirited away by his greedy wife and her boy toy—there’s not a feeling of discovery, of revelation. It’s just one more speed bump on a hazy drug trip. The scenes that Anderson shapes are calculated to appear crazy, weird, and disjointed, but nothing in this movie amounts to anything, and Anderson seems to be defying us to challenge him on this, since aimlessness is his raison d'etre. But who cares if the movie's no good?

I really liked Anderson’s 2007 film There Will Be Blood. I felt admiring of The Master—and more interested in it because it seemed to be about something more than this—but Inherent Vice’s lackadaisical structure just doesn’t work for me. Now, there’s always the possibility that such a structure will appeal to some viewers, especially those who aren’t expecting some kind of rip-roaring pot-boiler ala L.A. Confidential (which is a much more exciting, plot-driven L.A. noir.) Then again, there are loosely structured movies that I really adore, such as Jim Jarmusch’s Only Lovers Left Alive. But that film had a mood that was much more effective. It takes place in the perpetual night world of two vampires, and is set to a lot of silky, pulsating rock music. Jarmusch captured a mood with absolute precision. Anderson is going for a similar “nothing-is-happening-everything-is- happening” feel here, but he can’t quite achieve it. Anderson is in many ways a stronger director when his material is about something. He needs an idea to shape that is more concrete than what he gets from Thomas Pynchon. And yet, Inherent Vice has the distinction of being far less self-important than either There Will Be Blood or The Master.

I will say that one day I’d like to revisit Inherent Vice, and see if the movie doesn’t improve with a second viewing, free of the tyranny of expectations. But for now, I’m not only unconvinced, but hugely disappointed in a movie to which I was looking forward for months. (Also, I really hated the narrator's childlike, twangy, fake-serious, extraordinarily grating voice.)