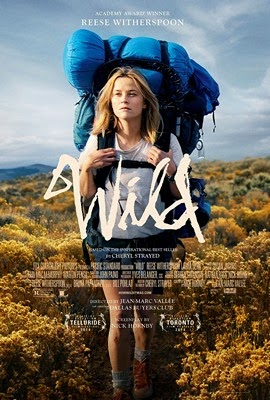 In 1995, Cheryl Strayed (whose last name is itself a piece of hand-picked autobiography) embarked on a thousand-mile hike along the Pacific Crest Trail, which begins at the border of the U.S. and Mexico and ends at the border of the U.S. and Canada. She later wrote about her experiences in Wild, and it was adapted for the screen by Nick Hornby and directed by Jean-Marc Vallée (Dallas Buyers Club).  Playing Cheryl Strayed, Reese Witherspoon (who also helped produce the film) is quite good, reminding us of the performer who did such excellent work in films like Election and Walk the Line. The film, especially given its weighty, emotionally raw subject matter, is surprisingly light on its feet. I haven’t read Strayed’s memoir, but it’s pretty clear that her own take on her life is at least somewhat ironic (especially given that last name, which she picked for herself after getting divorced).

I’ve been backpacking twice, in the mountains of North Georgia and the mountains of Tennessee. Both times, I was filled with self-hatred during, but proud of myself afterward. I remember the exhaustion and the pain and the fact that I ate an apple during one of those hikes that tasted like candy. It was truly the best apple I will ever taste in my life. In the film, Strayed comes to a check point where other hikers are camping and where there’s shelter and food. She asks for a Snapple and a bag of potato chips, and then gratefully partakes in them. Oh, the little things we miss when we isolate ourselves from the creature comforts.

Cheryl Strayed has a reason for this extreme, demanding, exhausting, long hike. In the wake of her mother’s death from cancer, Cheryl’s personal life took a self-destructive turn. She became addicted to heroin and began sleeping with any man she met, which—as one might expect—destroyed her once happy marriage. (Her husband is played by Thomas Sadoski.) Cheryl sees this thousand-mile journey as a kind of quest for healing, although she isn’t sure she wants to be healed.

We watch as Cheryl’s memory winds back through the events of her life, and tries to make sense of them, as she’s struggling to survive in the wilderness with an extremely overstuffed backpack. (Finally, someone pulls her aside and helps her prune the pack, in one of the movie’s funnier moments.) Cheryl’s flashbacks provide little glimmers into her life and the painful experiences that have brought her to the Pacific Crest Trail, from her abusive father to her dead mother to her descent into drug abuse.

A lesser director would have used Strayed’s emotional baggage as a device, erecting its heroine as an untouchably noble piñata of tragedy, beaten into the dust by her life. Instead, Vallée lets the memories of Cheryl’s trauma drift in and out of her head, the way memories do in real life, and they feel organically connected to her story rather than obviously calculated for dramatic effect. Cheryl is never completely sold on fixing herself, and yet she longs for more time with her now dead mother (played beautifully by the iridescent Laura Dern) and some kind of reconciliation with her ex-husband (Thomas Sadoski).

Obviously, Wild is a movie that wants to tackle big emotions. But it rarely resorts to cheap ploys. Cheryl Strayed becomes a person we relate to. The kind of heartache she bears is the same kind of heartache we all suffer from in our lives, and instead of saddling the film with meaninglessly cheerful Hallmark-ish resolutions or contrived happy endings, Wild lets the wounds bleed and the hurts hurt.

Reese Witherspoon’s performance is terrific. She’s plucky, but also disarmingly honest, especially when it comes to her status as a hiking novice. Because Witherspoon is blonde and beautiful, she’s had to fight the impression—perhaps self-imposed thanks to movies like Legally Blonde—that she’s a Barbie doll first and an actress second. Actually, she’s a fine performer, and Wild reminds us of the complexities of which Witherspoon is capable of showing on the screen.

What makes Wild work are the numerous encounters Cheryl Strayed has during her journey with fellow hikers and also with people who give her the occasional ride, or the people working at the check-points, where Strayed has care packages sent (containing clean clothes, food, books, and money, among other things). And of course, the movie is bolstered even more by its beautiful landscapes. It’s like National Geographic and Eat Pray Love had a baby. But my suspicion is that Wild is much more emotionally honest than Eat Pray Love (which I haven’t seen).

Wild may be a calculated end-of-the-year release, but it’s also funny, powerful, moving, and rough around the edges in a way that truly works for it. The human brokenness it depicts is as honest as the terrain Cheryl Strayed travels is gorgeous. Jean-Marc Vallée, who seemed too distant from his characters in Dallas Buyers Club, finds a vision for Wild that is compassionate without being overly sentimental or maudlin. It may be catharsis at the movies, but it’s also a vital piece of filmmaking.