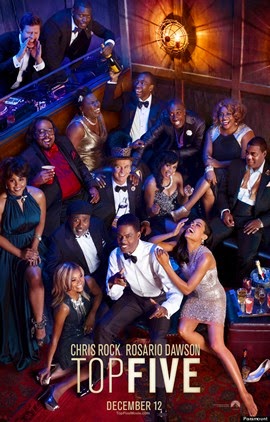 Hollywood loves movies about itself, which explains part of the current fascination with the overrated Birdman. But there’s another film out this year about the industry that is better than Birdman, although unlikely to get as much praise: Chris Rock’s latest triple-threat effort, Top Five. It’s a welcome addition to the usual self-important prestige pictures that bombard movie-goers at the end of the year. Top Five is funny, bold, even inventive at times, and it gets better as it goes along.

The story feels all too realistic: Chris Rock plays Andre Allen, a comedian-turned-movie-star whose biggest movie role was that of a giant bear named “Hammy” in three extremely lucrative Hammy the Bear movies. But Andre doesn’t feel funny anymore. The glitter has worn off his star. He’s battled alcoholism, faced a downward turn in his career, and is engaged to a reality TV star (played by Gabrielle Union) whom he doesn’t really like that much. Andre’s latest movie, Uprize, is a personal labor of love about Haitian slaves revolting against their white slave-owners. But his wedding is getting more press, and the movie is being virtually ignored at the box office. Top Five takes place in one day as Allen travels all over New York City doing press for Uprize while a writer for the New York Times named Chelsea Brown (Rosario Dawson) tags along with him so she can write a piece about his career. As they wander the city together, their conversations take on an increasingly honest and personal tone. (Both actors give fine performances.)

The first thirty minutes of Top Five didn’t strike me as all that funny, although the opening dialogue between Rock and Dawson, in which they argue back and forth about the degree of progress minorities have made in the United States—which serves as a kind of prelude to the movie—was fresh and funny. That chunk of the film felt a bit uninvolved, like a stand-up comedian who hasn’t quite warmed up yet. But then the movie does warm up, and once Top Five gains its momentum, the movie is often uproariously funny and dead-on in its frank discussion of a variety of issues. It’s been a while since a movie so deftly and loosely talked about the politics of race and gender and stardom and fame all at once (without getting lost in the fray). We see Andre Allen as a real person who lives in that weird fame bubble in which he’s  living a seemingly charmed life. But in another very different sense, he’s trapped by the often insipid demands of the public who just want one more “Hammy’ movie, and trapped into indifference to the world around him, which seems to have gone madder by the minute. He’s still stinging from insults made by thoughtless critics, he’s suspicious of so-called racial progress, and he wants desperately to be taken seriously.

What distinguishes Top Five from most of the other comedies this year (except the other racially-themed comedy I saw, Dear White People), is that it knows how to be cinematic. Most comedies tend to veer into the realm of the sitcom in that they focus on thin set-ups and lots of gags. But Chris Rock’s film takes time to develop its characters into real human beings, and lets the humor grow within that framework. He’s smart enough to focus on things he knows a lot about, and thus creates a refreshingly honest and surprising and funny movie. He also lets Rosario Dawson go head to head with him, and she’s more than a worthy opponent.

The film has several terrific set pieces. Andre recounts with horror a disastrous night in Houston, ten years earlier, when he hit rock bottom in his personal life. (That scene, among others, will probably deter any viewers who find crude humor offensive.) Rosario Dawson’s character, Chelsea, later serves up her own horrifyingly funny tale about her boyfriend (played by Anders Holm of TV’s Workaholics). I won’t spoil either of these scenes because they’re absolutely hysterical. But believe me, if you are turned off by gross humor, these scenes alone are reason enough to avoid the film. But it’s a rewarding movie, and it manages to find a real sense of truth within the comedy, and a real humanity within its study of the nature of fame.