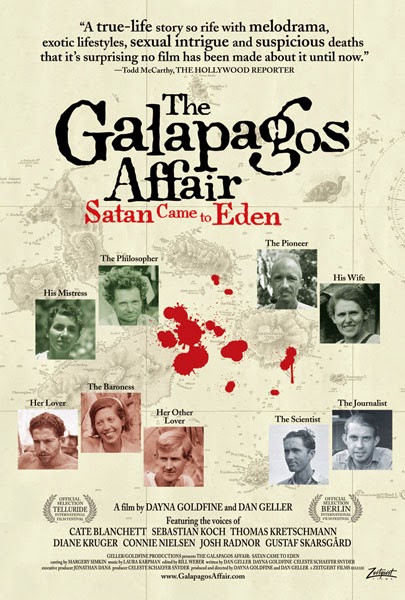 It’s 1929, and a German doctor named Friedrich Ritter and his lover, Dore Strauch, have set sail for Floreana, an uninhabited island that is part of the Galapagos archipelago, hundreds of miles from the coast Ecuador. Hitler is rising, war is only a decade away, and Ritter and Strauch are finished with modern society, and on Floreana they hope to found a kind of paradise free of the sicknesses of civilization. But their dream of paradise is short-lived. News of their strange move makes it back to the Continent, and soon they are joined by Heinz and Margret Wittmer (also German) and their children, and later by an eccentric woman named Eloise von Wagner, who calls herself The Baroness, who’s accompanied by her two gigolos. The anti-social doctor and his girlfriend—who is stricken with multiple sclerosis—aren’t exactly happy about the unexpected social activity on their isolated island paradise. Soon, there will be mysterious disappearances and deaths, and possibly even a few murders.

If the plot I just described entices you, then check out The Galapagos Affair, a thrilling new documentary that’s currently streaming on Netflix. The film is strung together with narrations of the writings of Ritter, Strauch, the Wittmers, and others, and also features interviews with current residents of the Galapagos Islands. It’s a tad long, and some of the interviews are a bit confusing (and needless), but the story of these seven eccentrics is absolutely delicious, and the film sizzles with juicy speculation. (There’s also lots of actual footage of the islands now and then, including moving images recorded by the inhabitants themselves.) Among others, narration is provided by Cate Blanchett, Diane Kruger, Sebastian Koch, and Connie Nielson. Directed by Daniel Geller and Dayna Goldfine.
by Jacob Lusk @ pannedreview
Email ThisBlogThis!Share to TwitterShare to FacebookShare to Pinterest
Tags 2014, Cate Blanchett, Diane Kruger