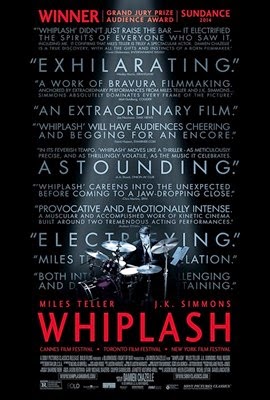 If you like jazz, you need to go see Whiplash. Whiplash is the second feature from writer-director Damien Chazelle, who expanded the material from his 2009 short film. It is one of the most energetic, exciting, funny, and intense movies of the year. Rarely these days do we get a music-themed movie that isn’t some heavy, boring biopic. (Although some of them are quite good, it’s true.) Perhaps because Whiplash is fiction, it’s focused less on prestige and more on capturing the intensity and the energy of music—jazz in this case—as it’s experienced by a musician striving for greatness. Its central character is a young drummer named Andrew (Miles Teller, whose very name sounds like that of a great jazz musician), who is currently attending the fictitious Shaffer Conservatory, the top music college in New York (and thus, the world). His dream: to be known as one of the best, right up there with Miles Davis and Thelonious Monk and Charlie Parker.

Earlier this year Miles Teller gave a fine performance as a mean, pissed-off teenager in director Gia Coppola’s lovely, heart-breaking film adaptation of some James Franco stories, Palo Alto. In Palo Alto Teller’s character vented his anger by abusing other teens and living recklessly. We rarely saw any vulnerability in him, but we knew from the look of anger tempered by anguish on Teller’s face that he was hurting. In Whiplash there is more of that vulnerability, mixed with a kind of unbridled obsession. Miles Teller, who looks like a young John Cusack, is very good.

Teller pours himself into the role of Andrew, and we vividly experience the blood, sweat, and tears of being a musician, and of wanting to be the best musician he can be (which still isn’t good enough). (The camera often cuts to his nasty bloody callouses or the sweat spraying the drum kit while Andrew rehearses in a claustrophobic little cell for hours on end.) At the beginning of the movie, Andrew is plucked from the middling first-year jazz band by the terrifying Terence Fletcher (J.K. Simmons, who's marvelously mean and hysterically funny), the conductor of the best jazz band at Shaffer. (He’s like the musical genius version of the drill sergeant in Full Metal Jacket.) Fletcher woos his musicians with his charming, fatherly demeanor, and then in a flash he berates them with a constant stream of profanity-laced verbal shish kabobs, jabbing at their personal lives, their appearances, anything and everything he can to make them feel very, very small. At one point in the film, he humiliates a young man ostensibly because his instrument is out of tune. He gets right in the young man’s face and screams, “Are you out of tune or not?” The man—who is now a boy beneath all that screaming and belittling—is sent out of the room with his tail between his legs, and then Fletcher reveals that the guilty musician was someone else, but that not knowing one way or the other was worse than actually being out of tune.

Under Terence Fletcher’s tutelage, no one is safe. Fletcher doesn’t care about feelings or dignity or whether students stayed up all night practicing or if they are going to be crushed under the weight of his insults, or worse, destroyed by the destiny-altering pronouncements he makes. But there’s a twisted yet valiant old-fashioned logic behind Fletcher’s often abusive language: He’s looking for the musicians who will stop at nothing to earn their place among the giants. Maybe there’s something inherently arrogant about this, and maybe it’s the work of a sadistic bully who happens to be a brilliant conductor with too much power in his hands. Terence Fletcher is the professor you dread taking in college, but he may also be the one who pulls something out of you that you didn’t know you had. (He may also drive you to self-doubt and self-harm.)

One of the greatest strengths of Whiplash is its keen awareness of the complexity of human emotion and intention. Neither of the main characters is completely good or bad. Andrew isn’t the perfect golden boy who wins our unmitigated affection, even though we do care about him and we do root for him. Our sympathy for Andrew is tempered by the realization that he needs to be taken down a few notches because of his arrogance. He’s from my generation—the generation that was told we were special and that we could do anything. We’re also the generation that got a prize just for showing up. Whiplash plays with that tension, too. Andrew doesn’t really know how to deal with criticism, and encountering it for the first time from Fletcher is like a five-year-old trying to learn how to read with a copy of Foucault’s Discipline and Punish. Fletcher is from the “old school” of sucking it up and not stopping until you’ve reached your goal. We can see the disdain he has for modern civilization and the idea that worth and talent are assumed, not earned. According to him, “the two most harmful words in the English language, are ‘good job’.” He has a point.

Whiplash has one major flaw. There are no strong female characters in it. This movie exists in a self-made masculine world where women barely exist, and always only on the periphery. The one female character we spend any length of time with is Andrew’s girlfriend, Nicole, played by Melissa Benoist, who’s charming and real in the few scenes we get with her. There’s a scene halfway through the movie where Andrew breaks up with Nicole because, as he puts it: he’s too driven to be a good boyfriend, she’ll come to resent his lack of attentiveness, he’ll come to resent her for standing in his way, and they’d eventually break up anyway. Nicole is justifiably hurt, but she’s also smart. “You’re right,” she says. “I should not be dating you.” She gets up and walks away, and it’s probably the best decision she’s ever made in her young life.

Andrew’s break-up speech is piercing and difficult to stomach. It reveals his passion, his selflessness and his selfishness, all at once. He is saving Nicole from some major heartbreak, if everything he’s told her is really the truth. But it’s supremely shitty to assume your girlfriend will stand in the way of your all-important drive to be the world’s next great jazz drummer. It’s also proof that Whiplash doesn’t understand women at all, which may be why Damien Chazelle doesn’t include a single woman in the top jazz band at Shaffer. (I guess girls aren’t allowed to be as good as Charlie Parker.) Andrew hides his selfishness behind a kind of admirable faux-honesty, and it’s this condescending, patronizing non-apology that makes Andrew very human in an unlikable way. It also makes some of the shitty things that happen to Andrew seem less pitiful. It distances us from him in a healthy way, so that we’re not unabashedly championing him during his fantastic drum solo. We know Andrew is kind of a jerk, even though he’s brilliant and in some ways a perfectly nice guy.

And about that drum solo. All I can say is, I wished my good friend Ben, who’s no longer with us, had been there to see it with me. He was a drummer, and I think he would have loved this movie. If you care about music, see Whiplash. If you want to take your kid to a good movie, and he or she is old enough to hear a lot of profane outbursts from a scary music teacher, take your kid to see Whiplash. Kids need movies that are full of energy and wit and complex emotions, and in this one they might actually learn something about the thrilling and wonderful danger of wanting something bad enough.

(And remember that girls can play instruments too. And maybe Damien Chazelle will remember to include girls in his next movie.)