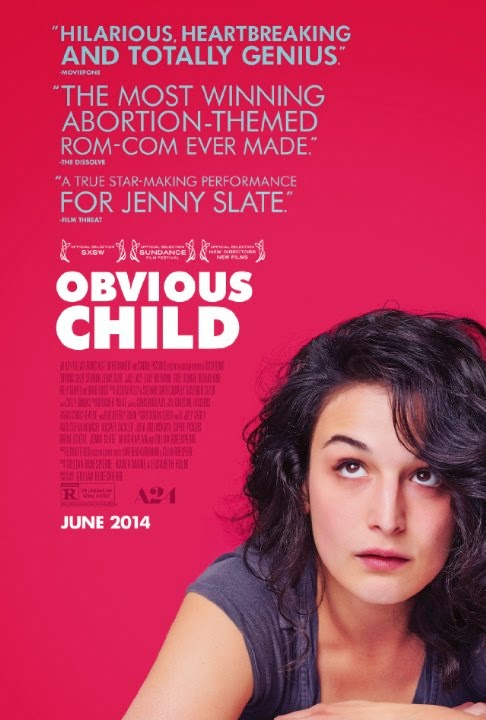 In Obvious Child, Jenny Slate plays Donna, a young comedian living in New York whose brand of comedy mixes brutally honest confessional storytelling with frequent bouts of scatological humor. Donna makes enough fart jokes to fill several Nutty Professor dinner scenes. The film is trying to prove that girls are allowed to be as disgusting as men who enjoy fart jokes. (Point: It’s certainly true that we still expect female comedians to be “cleaner” than male comedians.) After Donna’s boyfriend is hurt by one of her confessional moments, he reveals he’s been cheating on her with one of her friends. Their relationship ends and soon after, Donna discovers she’s pregnant, from a post-breakup one-night-stand with a guy named Max (Jake Lacy).

Max turns out to be a really good guy, but Donna shrinks in fear anyway. Donna sees her unplanned pregnancy as a huge risk, even a threat, to her burgeoning career, and even though she kind of likes Max, she’s not sure she likes him well enough to suggest forging a long-term relationship together for the sake of a child. Donna is still a child herself, navigating the life of perpetual adolescence that hits modern 20-somethings, who want to be treated like adults and taken seriously, but are also afraid of the big changes everyone has to face. (I’m not sure if it was really easier for previous generations, or if they just didn’t have the time—or the freedom—to make choices about their lives like who they would marry, if and when they would become parents, etc.)

Obvious Child has a lot going for it. It’s funny—if you can forgive the bathroom humor, which becomes tiresome quickly—and it’s also revealing and vulnerable, in the way Frances Ha (my favorite film of 2013) was. The difference between Frances in Frances Ha and Donna in Obvious Child is that Donna is visibly a wreck. While Frances tries very hard to hide the fact that she’s not all together, Donna promotes it (even though she’s secretly ashamed of it). She’s about to lose her job because the used bookstore she works at it closing. She has a tense relationship with her mom (Polly Draper), a successful academic who subtly lords her good life choices over her daughter. And she’s trying to be a comedian, which, if you didn’t know already, is an incredibly thankless, painful career to break into. Here she is at 25, still in many ways operating like a confused teenager.

But Obvious Child never lets onto to the fact that Donna isn’t a very nice person. She humiliates her boyfriend. She humiliates the very nice guy who’s trying to court her. She’s never called out for her sometimes unacceptable childishness, except by her patronizing mother (Polly Draper). Donna’s best friend Nellie (played by Gaby Hoffman) is unfailingly supportive, always blaming other people for Donna’s problems. She’s the best worst best friend, telling you exactly what you want to hear. On the other hand, I must admit I loved their friendship and the way Nellie was so loyal and loving to Donna. So I can’t completely fault this aspect of the movie. I think I just wanted someone to lovingly shake Donna into reality. (Also, I love that Gaby Hoffman is back in movies again.)

Obvious Child is a mostly enjoyable comedy, but I did have some moral problems with the ending. When Donna finally reveals her pregnancy to Max, and the fact that she is going to get an abortion, I wanted the clichéd ending where they get together and decide to raise the baby. But instead, Max accompanies Donna to the abortion clinic where she goes through with the procedure. There’s a poignant moment when Donna is sitting in a room after the procedure with a bunch of other girls, all of them strangers to each other, all of them silent, all of them feeling strangely connected by this surreal experience they’ve just had, this seemingly magic antidote to an unexpected, unwanted pregnancy. I could not help but feel that the movie was sending a mixed message about life. It’s easy for me to say that women in this situation shouldn’t abort, since I’m a man and will never have to face that decision so directly, but I felt like Donna was missing a huge opportunity, especially when the father, I think, would have jumped at the chance of raising the child with her.

But even Max refuses to question Donna’s reasoning or her decision. Is he respecting her wishes, or just afraid? Donna emerges as this somehow always right character, and nobody ever questions her except her mom, who’s kind of a jerk. But, there is a wonderful scene between the two of them which bonds them together, when Donna’s mom reveals that she too had an abortion. It’s wonderful because Donna, at the end of her rope, gets into the bed with her mom and asks for comfort when she’s not sure she’ll get anything but shame. And her mom responds not with scorn but love. Actually, there’s a funny exchange here. After Donna delivers the news of her pregnancy and her plans to get an abortion, her mom says, “I’m relieved. I thought you were going to say you were moving to Los Angeles.”

The point of Obvious Child is that women need each other and they need to talk about these unmentionable things with each other. But I also feel the movie elevates the cult of choice that we worship in the Western world. We’re so in love with our own freedom that we want to imagine our lives free of consequences. But as romantic comedies go, Obvious Child is a lot more interesting, a lot bolder, and a lot saltier, than anything you’re likely to find from a major studio.