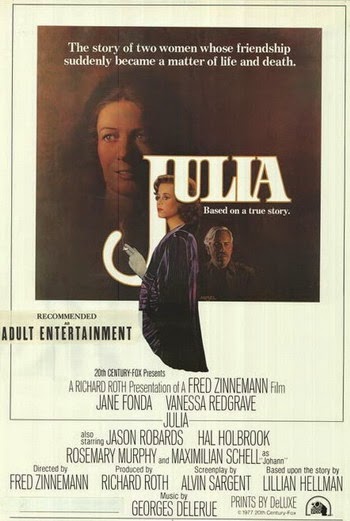 Julia (1977) explores the dubious friendship of playwright Lillian Hellman (Jane Fonda) and her eponymous childhood friend Julia (Vanessa Redgrave). (It's disputed that Julia even existed.) According to Hellman, Julia fought against the Nazis, and even roped Hellman into her cause by having her smuggle money from Paris to Berlin (in a drawn-out but tense sequence on a train). It’s hard to imagine this is the same actress that gave such a groundbreaking performance as the worldly wise call girl Brie in 1971’s Klute. It’s not that Fonda is bad, but she spends most of the time taking orders from other people and acting mildly nervous. The only life in her performance comes when we see her as Hellman the tormented playwright, pounding away at the typewriter to no avail. (In one scene she even chucks it out the window in a fury of writer’s block.) She's also pretty good in the last act, when she's given a little bit more of an active role in her movie. (It's not called Lillian for a reason: this movie is about one person's obsession with another person. But I don't mean to use that word in a suggestive or sensationalistic way. And the film dances around suggesting that Julia and Lillian's friendship was something deeper.) Fonda gives the same tense, uptight performance she would later reuse in 9 to 5, when she was clearly upstaged by the sharp Lily Tomlin and the bubbly Dolly Parton. In Julia there’s no one to upstage her. Everyone is deadly serious because this is a serious movie about a lot of serious themes. The tasteful direction of Fred Zinneman—from a script by Alvin Sargent—is fine, but nothing in Julia really stands out. Fonda narrates, breathing mournful intonations over Zinneman's camera. The scenes, which are well-constructed, aren’t vivid or powerful, and given the subject matter, Julia should have been more affecting. It’s also not particularly strong as a study of a friendship, as it purports to be. We’re never sure why Lillian and Julia are friends: Julia seems to put up with Lillian, whose worship of Julia doesn’t transcend to the level of an equal. And Vanessa Redgrave, who’s a fine actress, doesn’t do much to warrant the Academy Award she got from this. Some of the flashback scenes of the girls wandering the English countryside are attractively done, even haunting, but they don’t linger either. The film is haunting too, but it feels incomplete, dramatically undercooked. With Jason Robards as Dashiell Hammett (Hellman’s long-time beau), Maximilian Schell, Hal Holbrook, Rosemary Murphy, John Glover, and, in her first film, Meryl Streep.
by Jacob Lusk @ pannedreview
Email ThisBlogThis!Share to TwitterShare to FacebookShare to Pinterest
Tags 1977, Fred Zinneman, Hal Holbrook, Jane Fonda, Jason Robards, Maximilian Schell, Meryl Streep, Vanessa Redgrave