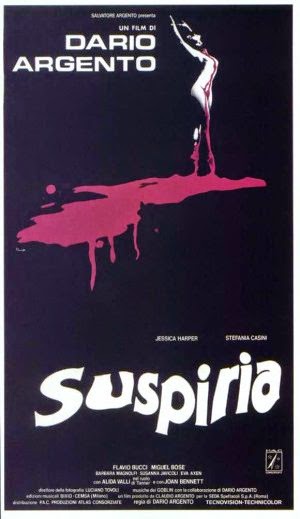 Suspiria (1977) is a film for which the word ‘garish’ could have been invented, a wacky thriller from Italian director Dario Argento—some call it his masterpiece—about a dance school in Germany that’s run by witches. The main character, an American student named Suzy Bannion (played by Jessica Harper) arrives at the school in the dead of night during a thunderstorm (a perfectly logical time to arrive at a dance school in Germany) and is confronted by ominous howling sounds and a disturbed fellow student fleeing the academy in terror. Slowly, as Suzy becomes assimilated into the school, she begins to suspect that the teachers are witches with agendas far more insidious than forcing young women to wear tight-fitting clothes and dance around on their tiptoes for hours.

How is it that a movie as dumb as Suspiria is considered such a classic? Well, it’s because of the film’s beautiful color and lighting and its nightmarish atmosphere. It feels as though it were conceived in the unconscious mind of a painter. Almost every scene is thrown into relief by bright reds and yellows. The sets are ornate, even when they’re supposed to be purely functional rooms. The music by the band Goblin—a sinisterly playful xylophone refrain set to throbbing drums—pounds away with devilish persistence. The film’s aesthetics do not cancel out the stupidity of the plot or the often ludicrous lack of logic. But they make Suspiria seem somehow brilliant. It’s as if Argento has deliberately pitted a dumb script against a marvelous visual design to see which one would win.

Right after introducing us to Suzy at the beginning of the film, Argento’s camera leaves her and follows the other student, the girl who’s running from God knows what through the woods and eventually to a mysterious hotel/apartment building to her friend. This is all setup for the most gruesome murder set-piece in the film, in which this poor girl is stabbed repeatedly and then dropped through the glass ceiling of the hotel with a noose around her neck. It’s been said that Dario Argento put the “gore” in gorgeous. Well, he certainly has a way of making terrible death scenes seem elegant. If this had been made by an American director, it would have felt sleazy. Somehow, the artistry elevates the material and you feel that you’ve truly entered into a visceral, vividly colored nightmare that’s being orchestrated perhaps by Picasso and Alfred Hitchcock.

Argento punctuates his gorefest with little odes to Alfred Hitchcock, like when a bat flies into a room and terrorizes the heroine (a la The Birds), or when his camera zooms in on water circling a drain (as in Psycho). But this film is far too batshit to be a rip-off of Alfred Hitchcock, and Argento has his own visual style that, while comparable in some ways, is far different. He doesn’t give a hoot about things making sense, which is maddening, and he doesn’t care all that much about continuity or motivation. Sure, it’d be nice if little details could be consistent. But it’s apparently no big deal if they are not. (Suzy tells someone she arrived at the school at 10 o’clock; then later she says it’s 11; when she is turned away at the school that first night, it’s never clear where she goes; when she comes back the next morning, she has no luggage and we never know how she even got there, nor does she make mention of these things to any of the teachers or students.)

Perhaps it’s a fault in the viewer (myself included) for wanting more consistency, more sense. If you take the movie as a dreamlike horror experience, you’re likely not to care as much about these things. The best scenes in this movie are remembered for their exaggerated expressionism. The final confrontation with the head witch is quite strange and yet entirely appropriate for a movie this bizarre. It’s sort of the splatter movie equivalent to Mario Brothers, when Mario finally gets to fight King Coopa in his castle after traversing many lands full of lesser goonies and underlings. The witch is quite a sight to hear and see with her deep, husky, gravelly voice and hideous burnt skin.

As for the supporting cast, most of the girls in the school are extras, and very few of the teachers register either. But, there are two well-cast parts among the teachers: Joan Bennett projects a venal confidence as Madam Blanc. You know she’s pure evil, but she’s also a woman of elegance, and her husky voice and her tightly wrapped hairdo and her smart attire make her seem like an aging movie star. It’s as though Olivia de Havilland is running the school. And Alida Valli plays Miss Tanner, a teacher who rigorously works the girls and plays up the stereotype of the strict, unflinchingly severe German instructor.