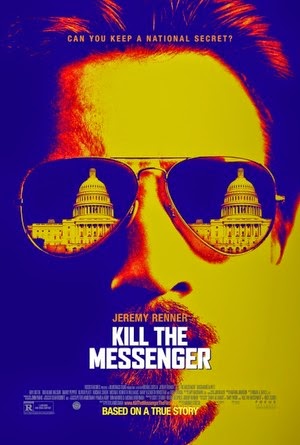 Why do I feel so ambivalent about Kill the Messenger? I think it’s because Kill the Messenger is trying to be both a riveting journalistic thriller and a tribute to a daring reporter. It doesn't always succeed at the former, although the problem may be a case of bad marketing. At any rate, I'll say this: Jeremy Renner is worth the price of admission. He plays real-life reporter Gary Webb, who wrote for a small paper in San Jose, California and who, in the mid-90s, began investigating a story of chilling implications about drugs and the U.S. government.

It’s pretty obvious that Renner, who co-produced this project, wanted to do a service to a man who, if the film is accurate, had his name and credibility dragged through the mud after he began reporting on the CIA’s alleged involvement in drug trafficking. The movie traces a seemingly tenuous connection between cocaine distribution in large American cities such as Los Angeles and political unrest in Central America in the 80s and 90s.

In the movie, Webb is handed this tantalizing story by the girlfriend of an accused drug dealer. She has conveniently saved a transcript of a drug dealer’s confession that implicates the CIA in allowing cocaine to be sold in this country. The motive? Supplying our political allies in Nicaragua with sophisticated weaponry. These are indeed alarming accusations, and when Webb’s story goes live, he’s met with a real firestorm of rage and hostility from the government and various other media outlets (most of whom are jealous that they didn’t get the scoop first, and then eager to prove Webb’s story a lie by undermining his sources).

Kill the Messenger is a solid piece of entertainment. It generally avoids the more dramatic temptations of a journalistic thriller. (If this had been made in the 90s, when the events actually take place, the filmmakers would likely have given this the full John Grisham treatment). The director, Michael Cuesta, wants to look at the man Gary Webb and the effect that his story has not just on the world but on him and his family. The film is hell-bent on humanizing Gary Webb, and at times feels less like a crackling thriller and more like a documentary about him. There are meek attempts to give us the John Grisham treatment, but they’re always suggestions, such as the scene when Renner sees someone prowling in his driveway in the middle of the night. He scares the man off and calls the police, but we never find out who it was. Some sneaky possible CIA goons worm their way into the house while the police are there and begin rifling through Webb’s stuff; this is the heart of the scene and the prowler is a mere device to get us there.

The film also struggles to be consistent at times. When Webb’s story first emerges, he’s quickly hailed as the reporter of the year by his peers. But then we see almost everyone in the journalism world renege on their praise: the bigger papers question the veracity of Webb’s sources and—possibly due to efforts of the CIA—raise doubt about Webb’s own integrity. After all this reversal of opinion about Gary Webb, the film (near the end) cuts to a scene of his big award night, as though none of the doubt or criticism has taken place, including the skepticism of Webb’s own editor (played by Mary Elizabeth Winstead, whose performance is at times lifeless).

Despite all Cuesta’s attempts to make Kill the Messenger an almost-exciting thriller, the most compelling scene involves Webb and his family. It’s when Webb is confronted by his teenage son, who has just found out about an affair his father had several years back. The actor, Lucas Hedges, shows us the gut-wrenching feeling of seeing your father no longer as a superhero, but as a flawed man. That moment does more to humanize Kill the Messenger than anything else. It’s also a turning point, where the movie becomes more interesting. But I should note that the “Gary Webb: Family Man” moments are not always successful, and Rosemarie DeWitt has little to do as Webb’s long-suffering wife. (The women in this movie are all pretty lifeless, come to think of it. The director doesn’t seem to know what to do with them.)

There are also compelling bits of documentary footage thrown into Kill the Messenger, of politicians like Maxine Waters and John Kerry decrying the CIA’s shady dealings with cocaine dealers and their detrimental effects on the black community in South Central Los Angeles. There’s a scene in the film where Webb and the assistant district attorney drive to South Central, and Webb gets out of the car and walks around for a moment. It’s one of those neighborhoods where white people feel unsafe because everyone there is black, and it’s clear the movie wants us to understand the very unsavory attitudes at the heart of the drug war: We just don’t care if it doesn’t affect “our own people.” It’s not unlike how Gone Girl points out the way rich white women who disappear are given far more media coverage than their black or Hispanic counterparts.

Kill the Messenger is somewhat hampered in its effort to be so many things to so many people, but it features a typically strong performance by Jeremy Renner, who’s always reason enough to see a movie. Renner lets the emotions his character experiences build and build, and watching him explode a little is kind of powerful, exciting. He’s a strong actor even when he’s not doing anything overtly grandiose or “explosive.” And in its defense, Kill the Messenger is a smart film that doesn’t go for cheap thrills or cheap drama. The emotions may be somewhat manipulative, but they’re also credible and honest. And the questions this movie raises are difficult to shake off. The ending is also surprisingly touching: it’s understated where so many films of this kind would go for something big and showy.