This Is Where I Leave You 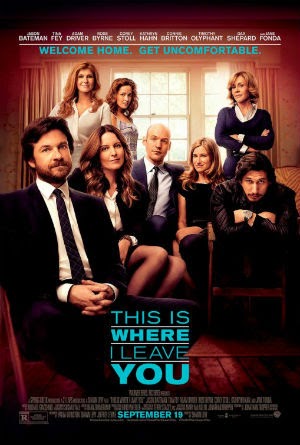 Although there are moments when This Is Where I Leave You is charming, funny, interesting, even poignant, it’s generally a mess. In fact the movie is such a mess that it's tempting to think that the makers confused narrative drama with dramatic structure, and therefore found it perfectly natural to let the structure be as loose as everything else in the movie. There are insane things that happen in this movie, and they seem to be happening for the sheer insanity of it. It’s about four adult siblings who come together after the death of their father. The matriarch—played by Jane Fonda—gathers them together in her large New England home for Shiva, the seven-day period in the Jewish faith during which family members officially mourn the passing of a loved one.

The film has an attractive cast: Jason Bateman, Tina Fey, Adam Driver, Rose Byrne, Corey Stoll, Connie Britton, Timothy Olyphant, Dax Shepard, Ben Schwartz, and of course the great Jane Fonda. But in order to have so many big names and big stars, you need a lot of big parts. And that’s probably where This Is Where I Leave You loses its way. It has too many characters, all of whom are required to have multiple scenes of inner-crises spilling out into the open.

For instance, Jason Bateman’s character, Judd, who walks in on his wife and his boss during a vigorous round of love-making in his own bed. (The wife later finds out she’s pregnant, but that it’s Judd’s baby, not the boss’s.) Wendy (Fey) is the bossy big sister who possesses a sometimes charming, sometimes grating, know-it-all quality. She too has problems: namely a husband who’s too busy with work to pay attention to his wife and children. Paul (Stoll) is the responsible eldest sibling. He and his wife Anne (Kathryn Hahn) are having trouble conceiving. And then there’s Philip (Driver), the baby sibling who never grew up. The actors are adept enough to make it work at least half the time, but these are pretty tried-and-true character types torn right out of the pages of a sitcom script.

That’s another problem. This is a sitcom comedy-drama movie, and it represents an increasingly distinct genre of films that typically have mixed results. They do give traditionally comedic actors a chance to cry on screen and look puffy and unattractive. And, like any well-behaved sitcom, the serious moments are always punctuated with something funny. It’s not wrong to do that, but it also seems sort of cheap to stifle every dramatic moment with an easy laugh (frequently derived from Jane Fonda’s enormous breast implants, which trigger intense anxiety in all of her children, especially as she presses their faces against her plastic bosoms while consoling them, as she is wont to do). Then again, these dramatic moments aren’t so important or revealing or original that they can’t be improved with a little comedy.

Actually, the saving grace in this film is the dippy character played by Rose Byrne. She’s a girl from Judd’s past, and their relationship is rekindled in the usual ways you expect from this kind of thing: boy meets girl, boy remembers girl from adolescent years, boy and girl have good memories of each other, boy shows up at girl’s work—a skating rink—where they skate and talk while Cyndi Lauper’s “Time After Time” spills over them from the speakers above. It’s not a particularly original romance, but it’s sort of enchanting to see Jason Bateman and Rose Byrne just hanging out, especially when the rest of the movie feels like a competition to see how many problems can be crammed into two hours of film.

This Is Where I Leave You isn’t really offensive in its quest to be the latest dramedy (or a light-hearted version of August Osage County), but it is disappointing. The director, Shawn Levy, and the screenwriter, Jonathan Tropper (who adapted his own novel), seem to be clutching at fragments of two different genres and then cramming them onto the same canvas. It helps if you’re a fan of Jason Bateman and Tina Fey, although it may not help to see them wasted in middling material. But Bateman carries the film well, and Fey is capable of real pathos. It’s perhaps most depressing to see Jane Fonda turning such tricks in a movie theater. She’s funny, but she hardly gets to do anything that isn’t surface-level, lowest common denominator humor.

Adam Driver has probably the most appealing part, but then that makes sense: he’s the stereotypical fun-loving youngest sibling, the one who’s also a perpetual screw-up. And of course, he’s vested with lots of unintentional bits of wisdom, all of them obliviously aimed at teaching the other siblings that their lives are just as messy as his. But if the film weren’t so careful in its adherence to certain character types, it might be funnier, more inventive. As it is, it’s a predictable, sometimes even boring, family drama that’s bolstered by the appeal of its considerable talent.