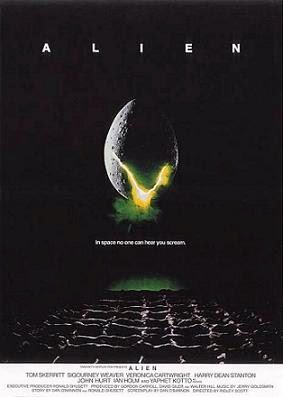 There are few horror movies as good as Alien (1979). That’s probably why the director of Alien, Ridley Scott, made Prometheus. He wanted to revisit one of the highlights of his career. But unfortunately, Prometheus was a big, shiny, beautiful failure, and by comparison Alien looks better and better with every passing year. As an example of effectively deliberate pacing, Alien remains unmatched. And as an example of a scaled-down, good, old-fashioned scare movie, it’s in a very elite camp with maybe nine other horror pictures. Even though some of Alien’s depictions of technology seem out-dated or just plain off, its keen awareness of the computer as control freak marks the film as a perennially relevant piece of horror filmmaking. (And...Sigourney Weaver.)

If we put Alien in context, we see that it was somewhat responsible for starting a new cycle of big monster movies from Hollywood. This is probably not a good thing, ultimately, as most of them are crap. But it’s at least a testament to Alien’s power as a film. (I hope…Perhaps it’s merely a testament to Alien’s box office success.) What were the noteworthy science fiction and horror films that immediately preceded Alien? Going back to 1968, there was Stanley Kubrick’s pretentious but magnificent 2001: A Space Odyssey, with its many self-congratulatory shots of futuristic man and his interstellar voyages. And more recently the genre was being re-routed with space operas and reverential aliens-are-wonderful-and-mysterious flicks such as Close Encounters of the Third Kind. Really, Alien was the first big-budget monster film of the modern era. The only other movies that compare are Jaws (1975) and the remake of Invasion of the Body Snatchers (1978) by Philip Kaufman. Kaufman’s movie is a masterpiece in its own, but for some reason it’s Alien that has stuck around in the culture. (That’s a shame. You should absolutely go and watch Body Snatchers `78 because it’s fantastic and it stars Brooke Adams, an under-appreciated leading lady of the period. It also stars Veronica Cartwright, who went on to play Lambert in Alien.)

Alien is certainly a throwback to the classic monster films of the 50s, but featuring the up-to-date-with-a-vengeance special effects of the 1970s. The great horror/scifi films from this period remind us how convincing practical effects can be, even when CGI is technically “better” looking. Somehow, there’s always something unreal about CGI. For some reason.

There’s an excellent documentary on Italian filmmaker Mario Bava that discusses in some detail how Alien essentially ripped off his 1966 film Planet of the Vampires. The documentary posits that director Ridley Scott likely didn’t know of Bava’s film, but that Alien’s writers, Dan O’Bannon and Ronald Shusett, did. If you watch just a few scenes of the astronauts—in funky 60s-style space suits that were later copied in Prometheus—exploring the vampire planet, you can recall the images of Tom Skerrit, John Hurt, and Veronica Cartwright as they investigate the alien spacecraft that lured them onto a lonely planetary system while their spaceship the Nostromo drifted peacefully towards Earth.

But Ridley Scott’s film may be the first outer space movie that genuinely scared the living daylights out of people. There are other greats, such as the Howard Hawks-produced The Thing From Another World (1951), and Don Siegel’s original Invasion of the Body Snatchers (1956). Some people have likely made the Hawksian connection to Alien because it features a strong female lead, Ellen Ripley (Sigourney Weaver), but actually Hawks may be more ahead of his time than Scott. Hawks’s female leads were tough and smart and sexy and they knew it. The characters in Alien don’t really have biographies or that kind of awareness that characters do in a Howard Hawks movie (such as The Big Sleep). There is a deliberate attempt in Alien to reduce the characters to the bare bones as a way of comparing them to the machines that operate much of their lives on board the Nostromo. The computer that ultimately runs the Nostromo is called Mother (a clever tribute to HAL in 2001). When Tom Skerrit goes into the little control room, which is dotted with yellow lights from ceiling to floor, he types the question, “WHAT ARE MY CHANCES?” into the computer. He’s about to go into the air ducts of the ship to try and corner the slimy, shape-shifting alien creature that has boarded the craft. “Mother” responds with “does not compute.” And then we realize how helpless they are at the hands of their modern technology. It sounds all too familiar.

The humans are almost dehumanized for much of the film, and yet there are scenes of real feeling between them and for them. Much of Ridley Scott’s work is somewhat cold and calculated, but this quality kind of works in Alien, and the actors are still able to convey something of a sense of camaraderie between the crew members, even if they don’t all like each other all of the time. Besides, how could you not feel bad for people trapped in outer space by a slimy, sharp-toothed alien that bleeds acid and has a habit of harvesting babies inside human stomachs?

Sigourney Weaver’s Ellen Ripley is credited as the first genuinely modern female character in a horror movie. That’s probably true, and yet I’m not sure how much it did to advance women in movies, or horror movies, or society. I’m certainly happy that Ellen Ripley is strong, and even happier that Sigourney Weaver gained a career by her tough-as-nails performance. There were plenty of films that followed Alien’s lead. George Romero did in his 1985 Day of the Dead, finally offering up a tough female character, but this was also an apology for setting the women’s movement back several decades with his catatonic female lead in 1968’s Night of the Living Dead.

Sigourney Weaver is a marvel. She carries this picture--her first starring role--with grace and strength and confidence, and is the heart and the soul of Alien. And near the end, when Weaver is walking around the escape pod in her panties, it feels like a cheap reversion to some old-fashioned male chauvinism until she dons a spacesuit and goes head-to-head with the alien creature. Perhaps they knew what they were doing, or perhaps it was just a happy accident that the makers of Alien--and Weaver herself--gave us such a strong performance. I am inclined to think that Sigourney Weaver knew what she was doing.

But there are still a lot of dumb characters in horror movies, and in fact, there are some dumb characters in Alien. As fantastic as this movie is, it relies on several cheap tricks to generate quality death scenes, like when Harry Dean Stanton is searching for the cat, or when two other crew members encounter the alien and—in customary Italian splatter movie fashion—stand absolutely still in sheer, passive terror. It’s a marvel that somebody thought to make Ripley as tough as she was, considering how ineffective most of her crew members were in a crisis.

But it’s hard to begrudge Alien for its little faults. It’s such a fun piece of outer space trash, so expertly made (capped by that subtle, sinister music by Jerry Goldsmith) and so deliciously rotten in a way, with all its cynicism and its nasty characters. And no, Aliens is not better.