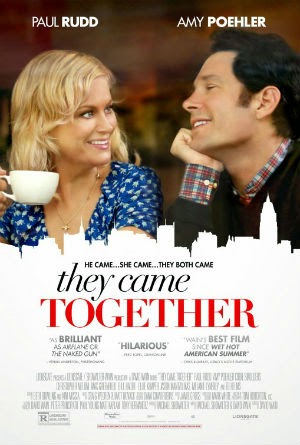 A throwback to the insipidly silly gags of the Naked Gun movies and Airplane (written by the Abrahams/Zucker/Zucker trio), They Came Together is a cheeky, "meta" spoof of romantic comedies, although, it's not exactly a pure spoof. It's more like watching a group of smart-ass comic writers give a tongue-in-cheek presentation on the tropes of the romantic comedy genre. Watching They Came Together, I was plagued with a nagging question: If this movie contained the enjoyable but dumb kind of humor of a Naked Gun movie (which I appreciate sometimes) as well as the presence of a slew of funny actors I love (including the great Amy Poehler as the romantic lead), why did I just want this movie to end?

The answer is quite simple. In the process of picking apart and laughing at the clichés of romantic comedies, They Come Together feels not different or clever, merely familiar. It falls into the bad-spoof trap of failing to tell an original story of its own. Indeed, They Came Together isn't much better than those wretched Scary Movie installments, all of which merely ape scenes and lines from the latest horror franchises. They don't actually try and tell an amusing story into which the parodies and references can be mixed.

The movie opens with Amy Poehler and Paul Rudd sitting across from another couple at a dimly lit restaurant. They're about to tell them (and us) how they met, and we're informed that their story is just like a corny romantic comedy. When the flashback starts, we see all the right notes being hit: Poehler's a klutz, but exaggerated to the point of absurdity. And she owns a too-adorable-not-to-like candy store that is about to be pounced on by the giant candy conglomerate for which Rudd works. That's when they meet and an unlikely romance begins. The detail about Poehler's character owning a candy store is priceless, one of the truly inspired jokes of this movie.

They Came Together is laugh-out-loud funny for about twenty minutes, until it goes completely stale and you start to feel that through some ingenious maneuvering of space and time you've been teleported to the Hallmark Channel. I grew restless. I perused my email. I sighed. I checked the remaining running time over and over. And it's mercilessly short at 83 minutes, but those minutes couldn't have gone by fast enough. What's so depressing about this movie is the sheer waste of talent. It would have been far better for them to have put the full power of their energy, intelligence, and comic wit and spontaneity into making a legitimate romantic comedy that was equal parts original and intelligent and funny. Instead, it's a forgettable pastiche that feels lazily contrived with nothing but a smarmy distaste for a popular genre, one that is an especially easy target.

Wow, with all those great names? That's a real shame. I love several of those actors/actresses (what's the non-gender plural for actor / actress? actrii?). Yes, a real waste.