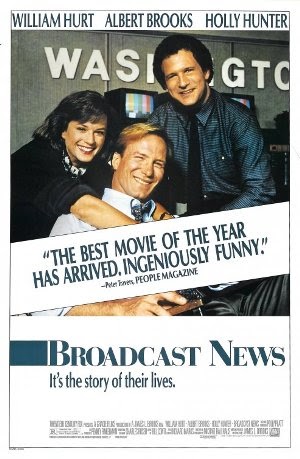 Broadcast News (1987) was written and directed by James L. Brooks, one of the creators of The Mary Tyler Moore Show, which may be the greatest sitcom ever made. Brooks returned to the newsroom comedy format with Broadcast News, but with far less success. The characters in this film--there are three main ones, played by Holly Hunter, William Hurt, and Albert Brooks--somehow seem more sitcomish than the characters on Mary Tyler Moore, who were richly developed even in the show's first season, and became even more layered as the show progressed. It's apparent that Brooks, who transitioned into movies after decades of working on the small screen, was unable to create characters who worked on a cinematic level. Instead, each of them is a kind of mishmash of various yuppie traits and psychological problems.

The film opens with short introductions to the main characters as children, showing us the traits necessary for their future careers manifesting themselves even in grade school. Hurt's character, the handsome but intellectually inferior anchorman, struggles even then to compete at an academic level, and complains that he'll never succeed in life because people only like him for his looks. Holly Hunter's character, a Southern girl who's already planted in front of a typewriter, shows her spitfire zeal for telling stories and seeing beneath the surface of communication, and Brooks's character is the typical egghead kid that nobody likes.

So the film establishes these rather obvious characters and then sets them at work in a newsroom together. But it's difficult to believe that William Hurt struggles to keep up intellectually, especially because he comes to Holly Hunter, who's the producer, and complains to her that he doesn't measure up. Somehow, his self-awareness and his ambition to improve make him a less interesting character. He's almost a Ken Doll of banality. If he were Ted Baxter from The Mary Tyler Moore Show, the lovable narcissistic buffoon, we'd at least have something to laugh at.

And Albert Brooks, who made a pretty good living in the 80s playing cynical, sarcastic, smart yuppies (see Lost in America), grates on the nerves. His cockiness is a turn-off. He's more obviously arrogant than William Hurt's character, who may hide his arrogance behind a mask of fake-humility. However, he's intellectually honest, and the movie and James L. Brooks want us to prize this above all other qualities. And that's why Holly Hunter's character is so torn between the two men: One of them is handsome and "needs" her to help him be a better thinker, and the other one is smart and goes out of his way to value her as his equal. But these are such cookie-cutter 80s characters, and in so many ways, Broadcast News is such a cookie-cutter 80s movie, that I found myself increasingly less interested in the whole affair.