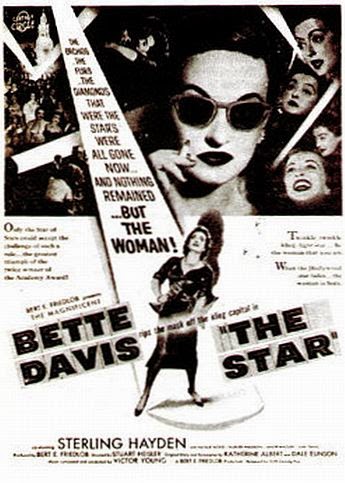 Bette Davis is arguably the best actress of the old Hollywood era. Even bad movies are bolstered by a Bette Davis performance, even a bad Bette Davis performance. Davis dominated the screen in the 1930s and early 40s, but by 1950, her career seemed to be over. All About Eve and its writer-director Joseph L. Mankiewicz "resurrected me from the dead" she once said. All About Eve remains one of the great studies of an actor's neurotic sensibilities, and it signaled a new sub-genre of Hollywood films about Hollywood films and their troubled people. They were generally dark movies, like Sunset Boulevard and In a Lonely Place. All About Eve's heroine, a fictitious Broadway star named Margo Channing, feels threatened by a hot young thing--a seemingly devoted fan named Eve Harrington--and is all the more self-conscious about her career because she's just turned 40. But watching Bette Davis in All About Eve is like watching a fireworks show that has been perfectly paced and brilliantly executed. She gives the best performance of her career in All About Eve, and yet its success led to a lot of rather crummy pictures, like The Star (1952) which is the dark side of Margo Channing. Here she plays Margaret Elliott, a fading movie star who can't get her life together.

Bette Davis was always at her least appealing when she played it pathetic, and her Margaret Elliott--with the exception of a few blowsy, blustery sequences where she shouts at the top of her lungs and that old Davis fire comes back for a moment--is a concoction of camp and mock-tragedy. Watching Bette Davis, you always get the feeling she's being put on display. That only became problematic when it no longer seemed like she was in on the joke. In The Star, it's not clear if she is or isn't. It's quite clear, however, that she's pandering to the audience in a new way that her Margo Channing never did. The Star is fascinating, particularly in its depiction of dead Hollywood acting careers (particularly for actresses, whose beauty/sex appeal has faded). But it's never fun seeing someone like Bette Davis being so defeated by life. When Margaret finally gets a shot at another movie and she ruins it by trying to make her feeble, aging character appear sexy and appealing, it's a new low for the movie and the star. (And that last-minute redemption scene at the end is pure garbage.) Even in movies like Dark Victory, where Davis's character was beautifully terminally ill, she rallied, and we rooted for her. The Star was directed by Stuart Heisler. With Sterling Hayden as a hunky actor that takes Davis's character under his wing. (She helped him start his career years back.) Also with Natalie Wood, in a truly bad performance as Davis's daughter, Warner Anderson, and Fay Baker.
by Jacob Lusk @ pannedreview
Email ThisBlogThis!Share to TwitterShare to FacebookShare to Pinterest
Tags 1952, Bette Davis, Natalie Wood, Sterling Hayden