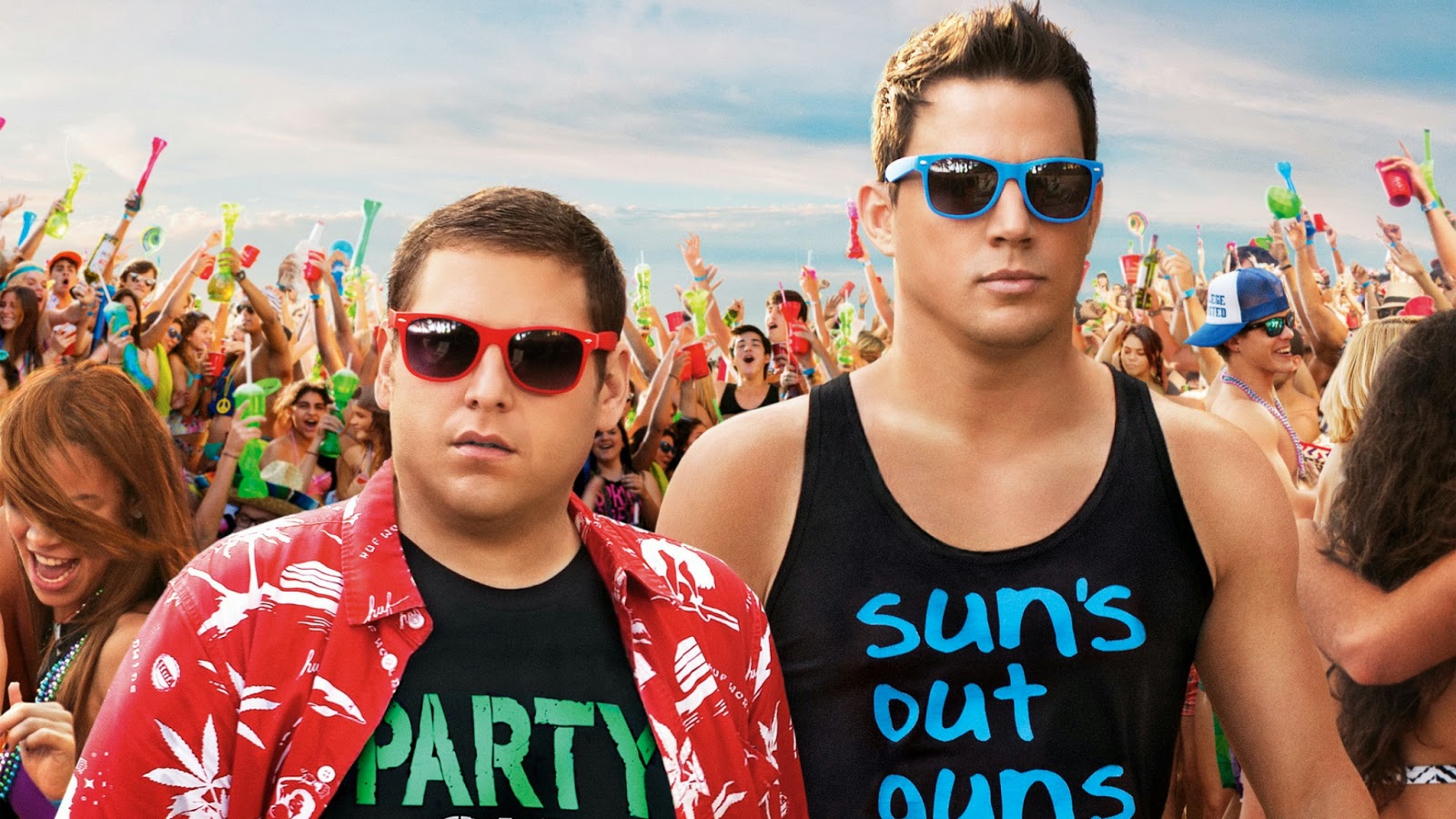 I haven't seen 21 Jump Street (the film or the TV show on which it was based), but I must admit I had a good time at 22 Jump Street, a big-budget comedy that at least has the decency to make fun of itself. It also does a remarkable job of spoofing/elevating the male buddy comedy. I remember reading something in college about the male homosocial relationship. That word kept bubbling up in my mind throughout 22 Jump Street, a movie that celebrates the good things about male friendship and pokes fun at the idea that men should constantly demarcate the lines of heterosexuality that keep their friendships from looking anything other than straight. As ridiculous as this movie is--the plot is somewhat incidental--it's hard not to like. Channing Tatum proves his comic chops, and Jonah Hill--an actor I've had a hard time liking on screen--becomes sympathetic. I didn't expect to have either of those reactions walking into 22 Jump Street.

This time the partners--who in the previous film infiltrated a high school despite being far too old to convincingly play teenagers--are sent to a college to investigate suspected drug dealing. The drug in question (which is something of a joke in itself) is a new hybrid called WHYPHY (pronounced like Wi-fi). It's the latest thing with all the young folk, giving them about four hours' worth of intense concentration (for studying and such) and then another four hours of intense insanity (for being crazy and such). But when one of this new concoction's users dies, the police become worried that it could sweep the nation. So they send in Tatum and Hill for a little undercover work.

Channing Tatum has a comic goofiness that I haven't noticed before. I'm guessing it's present in 21 Jump Street (and probably other films going back even further), so I'm a bit late to the party. But it's a wonderful realization that he's not just making it on his looks. (Because Magic Mike was pretty dreadful.) He has timing and spontaneity, and he plays the slightly dumb cop with charm. He and Jonah Hill also have a good chemistry together. Their relationship--which is constantly being subversively (and not so subversively) compared to a gay couple's--is about as messy and high-strung as two people who have been married for 10 years.

Along the way, 22 Jump Street manages to make a lot of fun of its own bigness, and the fact that it's now part of an apparent franchise. (The end credits--imagining all sorts of Jump Street sequels that would make the creators of the endless Police Academy series feel inadequate--are truly hilarious.) But what makes this movie work is the sense that these are guys who care for their friendship. As sex-obsessed as a lot of these movies are (there seems to be no other object of amusement in the mind of many a Hollywood comedy writer), the writers of 22 Jump Street (Michael Bacall, Oren Uziel, Rodney Rothman) are at least interested in the idea of friendship and the weird emotions that can make friendship as complicated as a romantic relationship. And the fact that the line becomes blurred in distinguishing between the two is a reliable source of comic inspiration for this movie.

As a movie, 22 Jump Street works about as well as a Beverly Hills Cop-type film: it's predictable, a bit loose with its sense of story, and overall, not too inventive. I'm sure I'm guilty of over-praising the film for its humorous self-awareness. After all, being self-aware doesn't excuse a movie for being predictable or resorting to the same old jokes. Perhaps it's just funny because this is a big studio production, and it feels like the writers are sneaking in jokes at the franchise's expense. (On the other hand, the product placement--I noticed quite a few brands prominently displayed--somewhat hampers this trick.) But if you want something funny this summer, and you--like me--weren't all that thrilled with Tammy--you could do a lot worse.