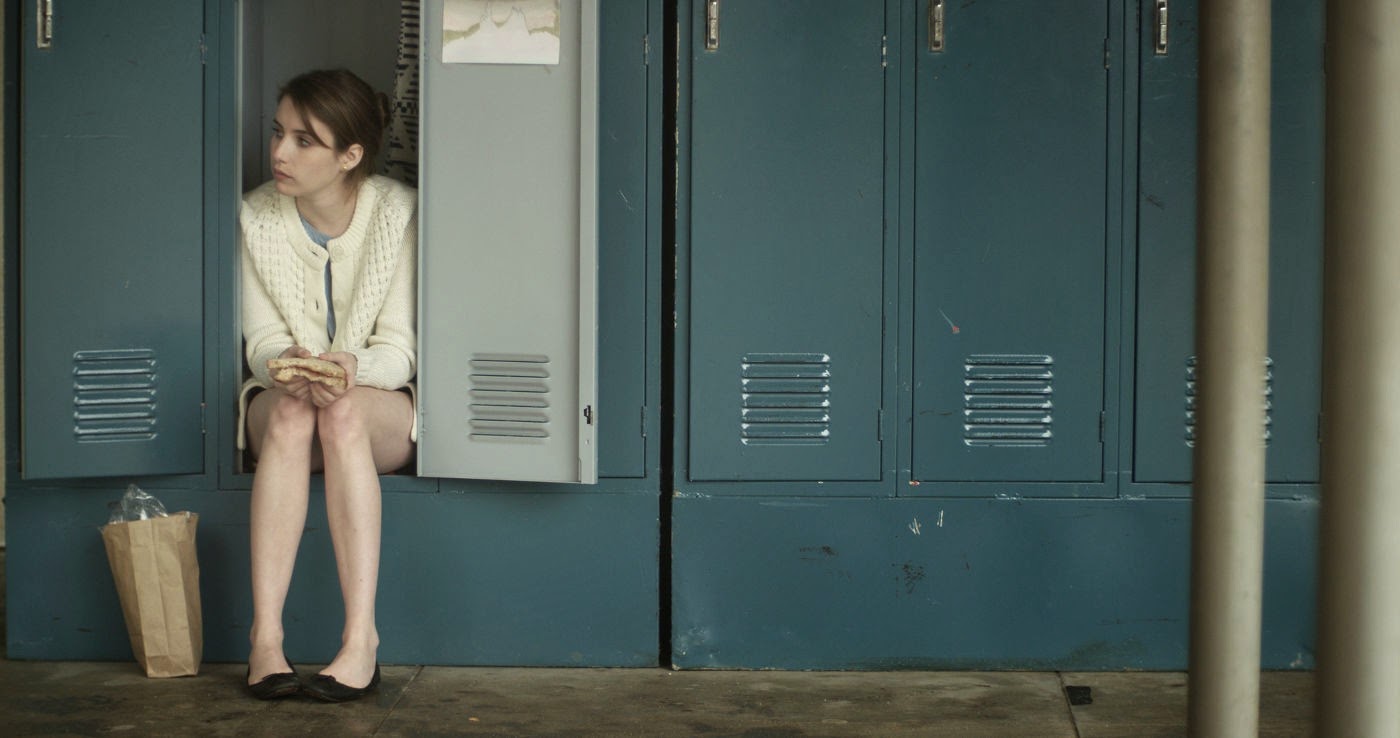 James Franco has seemingly done it all. He's acted in giant blockbusters and indie films (both good and not so good), soap operas, the cult hit sitcom Freaks and Geaks, and an episode of 30 Rock in which he played himself. He's directed a documentary imagining the lost (X-rated) content of William Friedkin's 1982 thriller Cruising, gone for a PhD in English at Yale, and recently, written a book of short fiction called Palo Alto Stories. From that collection, which I have not read, filmmaker Gia Coppola has fashioned a stunningly beautiful work called Palo Alto. It's about a group of teenagers in Palo Alto, California.

The film left me feeling a bit disturbed and heartbroken for the lives of young people, not just today but any day, because so much of being young is a kind of aimless search for meaning and identity. And really, that search doesn't necessarily go away once a person reaches adulthood. Sometimes it intensifies. Sometimes it makes you cynical. Sometimes it makes you afraid. In superficial ways, the kids in Palo Alto are pros at being teenagers. That is, they party hard and have no qualms about partaking in the expected teenagery vices. Their parents are generally out of the picture or too self-involved to notice what their kids are up to. The few adults we get to know are actually just as irresponsible as their kids.

On the other hand, that's not all there is to being young. And I suppose it would be easy to watch a movie like Palo Alto and jump to that conclusion. One of the problems with films about youth is that they tend to be stuck in stereotypes. We get a certain kind of cinematic teenage type that rarely changes. Little novelty or variety is offered up. Most kids are painted as searching and confused. Surely there must be some who aren't so self-serious? So self-important? Palo Alto reaches into the troubled teenager vacuum and plucks out a few that are desperately in need of saving, and then lets us watch them tread water. There's a kind of beauty in the film's impartiality to human tragedy. One boy--spinning out of control because of some repressed anger--gets drunk and then speeds down the wrong way of the interstate. We brace ourselves for a collision that is never revealed. It was a powerful moment. I wondered why Gia Coppola chose not to let us see if he did in fact crash.

The cast is headed by Emma Roberts and Jack Kilmer (whose father, Val Kilmer, has a small part also). Roberts plays April, a somewhat shy, smart, curious, playful girl who partakes, albeit reluctantly, in the incessant partying, but doesn't know if she really enjoys it. (She does enjoy cigarettes.) April is searching for something, but she doesn't know what it is, and she's also being pursued by her soccer coach, who's played by none other than James Franco himself. He keeps telling April he loves her, and it's not clear if he's telling the truth or just manipulating her. Regardless, his involvement with a teenager is a manipulation, because she's too young to know how to respond to his advances. She kind of likes them--what self-conscious young person doesn't want to hear someone say "I love you"?--and yet there's fear in her eyes. Is he a wolf on the prowl or just emotionally confused himself?

Ultimately Palo Alto left me feeling slightly indifferent. It has a lilting, fleeting quality to it. I think it captures some of the confusing emotions that afflict young people. But the characters aren't particularly strong, at least not the leads, although the cast is indeed talented. They don't leave much of an impression, except Nat Wolff, the douchey one with anger issues. He's the guy I loved hating, although I did feel sorry for him later in the film. And Zoe Levin--as the high school "slut" who's a bit pathetic, a bit sympathetic--also registers, especially when Coppola turns her into a kind of comic freak when she's pushed into a swimming pool by a rebuffed beau, after which she attacks him with a wine bottle. Perhaps James Franco isn't the best storyteller to be published and than have his work adapted into film, but Coppola turns it into a competent-looking piece.