Don't Vamp Out on Me, Bro

Dear regular readers (all five of you), who have probably noticed the dust collecting on the Panned Review over the last month-and-a-half,

I am sorry it's been so long. I feel as though I have abandoned you to the Pete Hammonds and the A.O. Scotts of the world, with their exuberant love of everything and their excessive use of adjectives, respectively. And now I'm back and you will probably see this sudden new post--leading with a review of a 27-year-old movie which I've already written about--as a cop-out. I haven't been to the movies since APRIL. Except for Mother's Day, when I took my mom and grandmother and my great aunt to see The Sound of Music at good old Sunray Cinema. But other than that, no movies. Not that I don't want to see Neighbors, or A Million Ways to Die in the West, or The Fault in Our Stars, or Chef. I'm going to do my best to get back in the saddle soon. Unfortunately, work became insane in May. And now here I am, a bumming-it temporarily out-of-work teacher sitting back for summer vacation thinking, "Didn't I used to write movie reviews for fun?"

Why would I bother to re-review a movie? Well, first, because I didn't remember that I had written a review of it already until I was finished with this one. And second because, it afforded me the opportunity to write oh-so-briefly about cinematic experience as memoir, which is something I find very interesting. 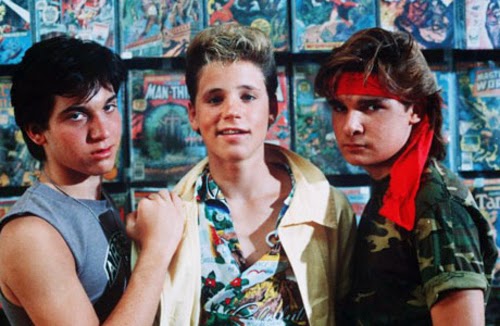 Last night I watched The Lost Boys (1987) for probably the 50th time. I don't normally enjoy watching movies I love and have seen multiple times with other people. It's as if I've invited an acquaintance over for coffee when it was just going to be me and my best friend. Suddenly, I'll start seeing all the flaws in my best friend as I examine him through my acquaintance's eyes. I end up not enjoying the movie or the company, and then I start questioning: Am I really as film fanatical as I think I am? Can I trust ANY of my old opinions about movies? Will re-watching them as an adult--with other people--ruin ALL of my old memories?

But this time was different, probably because one of my friends was a devoted Lost Boys fan herself, having gone to see it in theaters when she was a kid. Is there anything better than seeing an R-rated movie when you're too young? Admittedly, on the subject of the film's MPAA rating, we were all scratching our heads. The Lost Boys has no nudity, only one very brief scene of heavy kissing (but all the actual sex is just implied), mild profanity but nothing too excessive, and even the gore is exhibited in fleeting shots. The camera cuts away as quickly as possible, always before you see more than a second's worth of blood and gore oozing out of the vampire victims' necks. Granted, the finale--which features multiple vampire death scenes--is full of typically gratuitous 80s horror movie footage: corporeal explosion and implosion scenes designed to gross out even the most decorated horror veteran. But really, it just made me laugh and think, "Oh how I love the 80s. So over-the-top. So excessive. So what it is." 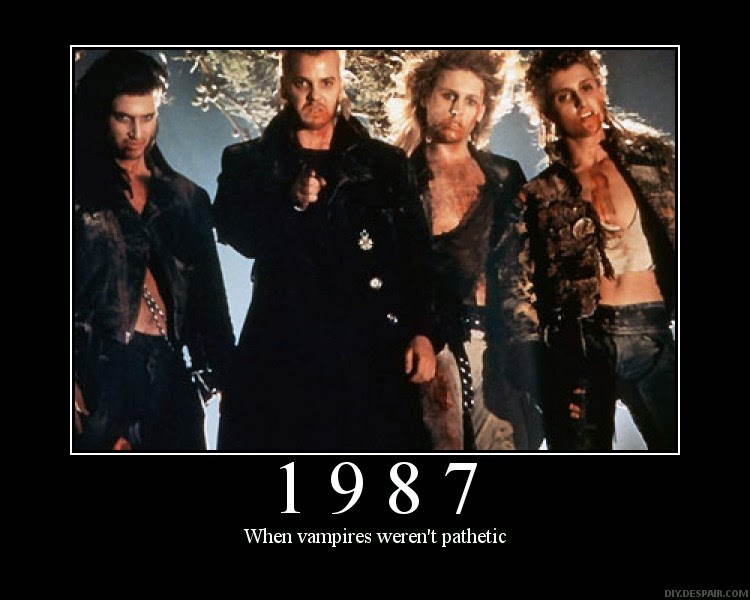 Movies today aren't what they are. They're too self-aware, too hip and ironic to be fun. The Lost Boys is a slick piece of Hollywood product, to be sure, featuring some of the hottest young stars of the time--Jason Patric (making his film debut), Corey Haim (rest in peace), Corey Feldman, Kiefer Sutherland, and Jamie Gertz. It's set in the fictitious town of Santa Carla, California (it was filmed in Santa Cruz), which the director (Joel Schumacher) and the writers (Jeffrey Boam, Janice Fischer, and James Jeremias) paint as a kind of refuge for rejects: it's right on the Pacific and its main attraction is a Strangers on a Train-esque fairground, which is one of the primary hangouts for the band of bloodsuckers, a quartet of punk-rock, ACDC-looking teenagers headed by the dynamic Kiefer Sutherland, who's quite believable as their self-appointed cult leader.

The vampires live in a cave right on the edge of the ocean, the site of a hotel that collapsed during the great quake of 1906 because it was built right on the faultline. This subterranean inverted resort is quite a showpiece for the production designer, Bo Welch. We see a chandelier resting snugly on the ground where it fell, and the rock walls are decorated with carpets and lights and the the broken knick knacks of the hotel, all of it forming a vague, shapeless style: colorful, glittering, excessive, monstrous. It's as though the original hotel had been decorated by gypsies right before it collapsed into itself. Right at the center of the main room of the cave is a huge poster of Jim Morrison, whom it's hinted at represents a kind of cult figure for the vampires. Unfortunately, the film never does anything with this idea. That's one of the primary flaws of The Lost Boys. It's brimming with ideas that are never shaped into anything.

But it's still one hell of a fun movie. And the film makes fairly clever use of all the tropes of the genre, sometimes conveniently breaking them in order to salvage a semblance of credibility. One of my friends was criticizing the movie's special effects which are, of course, now dated. I'd like to remind everyone--as I reminded him--not to feel too superior to old movies. To blame them for not being as technologically advanced as a movie from 2014 is anachronistic criticism and therefore invalid. Besides, I don't give a shit if the movie has a few dated effects. It's still pretty impressive. The filmmakers of The Lost Boys were able to do a lot with what they had, and the movie holds up quite nicely. More importantly, this movie has attitude and spunk and heart, and the actors are such fun to watch. Corey Haim has most of the best lines (like threatening to tell his mom that his older brother is a vampire, such a flacid piece of leverage in light of the circumstances). Although Barnard Hughes--as the drunk, quippy grandpa who's not used nearly enough in the film--gets a fantastic line at the very end of the movie, securing this film's status as one of the great 80s horror classics: "One thing I never could stomach about living in Santa Carla: All the damn vampires."

The Sound of Music (1965) is another movie I've watched like 50 times. It had been probably a decade since my last viewing, and I was a little bit apprehensive going into the theater. For one thing, one of my film critic idols (Pauline Kael) was allegedly fired from McCall's magazine for panning the movie back in 1965. (She re-titled it "The Sound of Money.") This was mostly legend. She was fired because she had been panning everything that was popular, and the people at McCall's were a little too mainstream for Kael's taste. Would Pauline come back from the grave and haunt me if I liked The Sound of Music? Would my new faux-hip self be too cool to enjoy the movie, or even worse, be unable even to secretly admit that I still liked it? After all, as a child I would watch it and sing along with the music, knowing every line from memory. I once drove one of my childhood friend's family crazy by singing the entire soundtrack during a very long drive to Washington D.C. (It's their own damn fault: I didn't force them to put the tape in.)

Despite laughing at a few moments (when the kids sing "So Long, Farewell" and the entire party waves back at them, singing, "Goodbye," I nearly lost it), I did enjoy The Sound of Music. It brought back some nostalgic feelings and made me want to visit Austria and learn more about World War II. Also, when the Von Trapps are hiding in the Abbey and the youngest Von Trapp imp asks Maria, "would this be a good time to sing about our favorite things?" I desperately wanted Julie Andrews to say, "Why the hell not?", break into song, and get them all arrested by the Nazis.

Also, I never realized as a child how sexy Eleanor Parker and Christopher Plummer were. They belonged in a different movie almost. And it's hard to understand why the Captain was attracted to Julie Andrews except as a potential mom for his kids. She's extremely feminine and good, but somehow sexless.

Finally, a plug for HBO's hilarious comedy Veep, starring the wonderful Julia Louis Dreyfus. If you're like me and don't have HBO, you'll have to wait until it comes out on DVD. Luckily for you, the first two seasons ARE out. So you're actually NOT like me because you can go get them right now. If you don't mind excessive profanity and lots of pretty vulgar insults, you'll enjoy the sharpness of this frighteningly real show. It's as if someone has captured the day-to-day inner-workings of DC through hidden video. When you see how much of what they do is image control, it will make you giggle, and then probably feel real disgust that our leaders in Washington do very little of substance. It's all spin all the time. But the cast of Veep, which also includes Anna Chlumsky, Tony Hale (Buster from Arrested Development), Matt Walsh, Reid Scott, Timothy Simons, Sufe Bradshaw, and Kevin Dunn, makes this show crackle. The show is somehow completely un-redeemable and completely lovable at the same time.
by Jacob Lusk @ pannedreview
Email ThisBlogThis!Share to TwitterShare to FacebookShare to Pinterest
Tags Christopher Plummer, Eleanor Parker, Julia Andrews, Julia Louis Dreyfus, Tony Hale