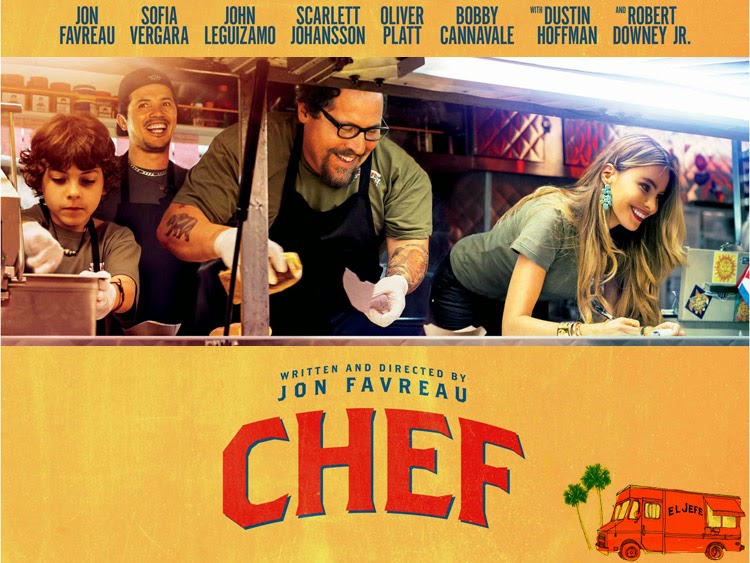 It's the most conveniently worked out movie I've seen in a long time, and yet Chef is the most fun movie I've seen this year (so far). It's an utterly joyous, unashamed foodie road trip movie about a once celebrated chef named Carl Casper (Jon Favreau) whose public meltdown (when he confronts a food critic who trashed him) goes viral and ends up completely uprooting his life. Casper was once the darling of the culinary world, but now he's old hat. For the past decade he's seemingly been in an ideal position as head chef at a well-known restaurant in California, but secretly it's confined him, made him unhappy and forced him to settle for a routine. Moreover, things are not great between him and his 10-year-old son Percy (played with delightful matter-of-factness by Emjay Anthony). Percy hasn't adjusted to his parents' divorce, even though they have the most amicable broken marriage in history.

But then, Carl gives in to his ex-wife's suggestion that he purchase a food truck and start making the recipes he's good at and wants to make. This suggestion--which Carl predictably balks at initially--proves to be a winner, and provides a framework for a new bond between father and son. They all go to Miami to grab the truck, and then Carl, his son, and Carl's long-time colleague (John Leguizamo) who also conveniently shows up to join in their grand foodventure, trek across country making Cubans, beignets, and assorted other delicious delicacies as they head back to California.

Jon Favreau wrote and directed Chef, and he captures the zeal of a foodie in this movie: We get to see the mouth-watering recipes that Carl cooks up, and the delight that appears on his face when he discovers a new, delicious dish, and the art that food can conjure up. It's perhaps the most accessible art form there is.

But I can already hear the critical voices in my head. I heard them last night in the theater about an hour into the movie. I looked at one of the friends with whom I was sitting and both of us were thinking, "something has to go wrong, right?" We were waiting and waiting for a problem to arrive. Granted, the film did have an initial problem, that being Carl Casper's embarrassing viral video fiasco and the subsequent destruction of his career. But things pick up very fast, and everything is all the more convenient for Carl because his ex-wife is supportive in a way that seems totally unrealistic. My inner-critic and my movie-watching past had primed me for some other contrived conflict to be inserted into the narrative. That moment, that conflict, never came. And we were left thinking, should we be okay with this? Is Chef too easy on its characters? Does everything work out too conveniently?

Oh right. It's a movie. And thank you Chef for giving us a movie that is a freaking movie. It's just so rare these days to find one that doesn't want to throw millions of contrived obstacles in its characters' paths. Yes, the events in Chef, the people in Chef, are perhaps unrealistic. The ex-wife (played with verve by Sofia Vergara) is so obviously still in love with Carl (and he with her) that you just know they're going to get back together. It's like The Parent Trap. And the son so desperately longs to be a part of Carl's world, that Carl's myopic inability to get to know his son (at first) seems to be the only real contrivance here. In fact, it was Jon Favreau's character that threatened to be the one annoying thing about this movie. For the first twenty minutes, as we watch him self-destruct, he's very obviously his own worst enemy. And that did get on my nerves. But things quickly change for the better, and this movie won me over thoroughly. And at least there were big things at stake in this movie: Carl's career, his relationship with his son, his own belief in himself.

There's another side to Chef that makes it culturally very relevant, or maybe just culturally amusing, actually. The film taps into the way the internet has revolutionized how we live and interact with each other. Favreau paints himself as the typically technologically-inept grown-up, whose son runs rings around him with a smart phone and uses Twitter (a website which Carl often amusingly fails to understand) to advertise the whereabouts of their food truck. In fact, it is Carl's ineptitude that triggers the whole movie: what he imagines to be a private message (via Twitter) to the food critic who slammed him, is actually seen by all and eventually passed on to thousands and thousands of people. Perhaps this movie was funded by Twitter? It can be difficult to distinguish between a movie that plugs a giant social media site and one that shows us how it has affected us. Chef falls into the second category.

For some time now I've wondered how movies would change as a result of the cell phone age and the internet age, and how movies would depict characters interacting with their gadgets, and I think Chef does a fine job of this. It makes use of these new things that seem to be taking over more and more parts of our lives, and manages to show us the best and the worst about them with a sense of humor. Perhaps the best example of a movie critiquing our gadget addiction is Don Jon, the Joseph Gordon-Levitt comedy in which his character's sister is always glued to her phone, and barely speaks a word through the entire film.

Finally, I once again feel the need to defend Chef. Yes, yes, yes, it is too damned easy. Everything just works out so nicely. But it was such a pleasure to watch, such a happy, energetic, likable movie, that I don't care. I hope people will give this movie a chance and not resort to picking its story apart because we're all so used to something more cynical in our entertainment, even when it comes to our comedies. With Scarlet Johansson, Dustin Hoffman, Amy Sedaris (in a very funny cameo as Carl's ex-wife's publicist), Robert Downey, Jr., Bobby Cannavale, and Oliver Platt (as the food critic).

Really enjoyed the movie! I probably wouldn't have seen it if not for your review. This is about so much more than food!