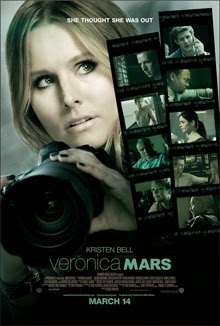 Kristen Bell plays Veronica, a thirty-ish year-old woman who is about to sign on with a big law firm in New York City when she's unexpectedly pulled back to her hometown of Neptune, California, where an old love interest has been accused of murder. Veronica, it turns out, used to work for her father, a private eye, and she apparently was pretty good at solving mysteries. This modern-day Nancy Drew flick is kind of thin--it feels like an extended episode of a TV show more than a movie--but then again, it's more of a valentine to the many fans of the show, which was canceled in 2007 after three years.

The initiated should be pleased with seeing many of the recurring characters from the show reunited. There were some confusing moments for non-fans, but overall, Veronica Mars is pleasing fluff, bolstered by the always plucky Kristen Bell. Jason Dohring plays Logan, her ex-boyfriend who went on to marry another girl from their high school days. Said girl is also the murder victim, a troubled pop star whose downward spiral (and turbulent marriage) was fodder for the tabloids. It all feels very much like something that could only happen in Hollywood. Where else would you rekindle your relationship with your high school sweetheart while trying to prove that he didn't murder his pop star wife, with whom you also went to school? (All while avoiding persistent phone calls from a charming would-be fiance and a prestigious law firm.)