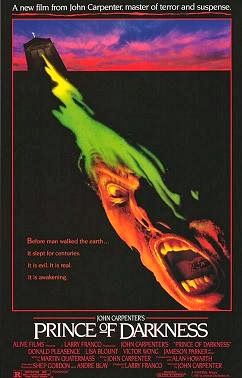 Watching John Carpenter's deliciously horrible horror opus Prince of Darkness (1987) got me thinking about Christopher Nolan. Nolan, the director of such mammoth and overrated pictures as the Batman movies and Inception, has been called a great filmmaker by a lot of people who enjoy the confused rumblings of ideas going on in his films. They think that Inception is brilliant because it seems to be deep, although they may be confusing "deep" with "convoluted." They attribute their confusion to Nolan's strength as a "thinking man's director," who is so brilliant that we cannot possibly understand him. They also think he's a great storyteller whose films deserve accolades galore and all of our undivided adoration and reverence. But really, Christopher Nolan is like bad John Carpenter ramped up on an obscenely large budget.

The main difference is--and this is key--that Carpenter unashamedly loves trash, while Nolan continually tries to elevate his trash to the status of art. Carpenter's early films had a kind of rich composition to them that made them look more expensive than they were, but viewers were always conscious that his movies are what they are: well-made but simply conceived and pleasing on a somewhat juvenile level. That doesn't make them any less special, either. I adore Assault on Precinct 13 and Halloween and The Fog and Escape From New York and Christine (a bigger production, but still good, and I think, underrated).

Prince of Darkness is utter hogwash: It's a silly movie that grabs at some ideas relating to quantum physics and some other ideas relating to Christianity and then jumbles them together into a sluggishly paced and witless thriller. The script is credited to a "Martin Quatermass," which is really just a pseudonym for Carpenter, who was presumably embarrassed enough to avoid crediting himself with thinking up this hacky movie, but not enough to relinquish his director credit. It's about a bunch of researchers who become trapped inside an abandoned L.A. church that houses an ancient canister of green ooze. That ooze, we discover eventually, is...Satan. Or the powers of darkness that Satan represents. Or something. Anyway, it's pure, liquified evil that the Catholic church has kept under lock and key for 2000 years. And Donald Pleasence, as a priest, uncovers it, this horrible "secret that can no longer be kept."

The film gathers a whole bunch of people together, but we spend so little time getting to know them--scientists, divinity students, tech people, and a prestigious professor of physics played by Victor Wong--that we don't really care when they're dispatched in gruesome ways. (Carpenter never got past the slasher genre in some ways: he almost always resorted to mindless killing after Halloween.) We're also not clear on why these people have been assembled. They repeatedly ask the priest and the professor, but are given cryptic answers basically meaning "you'll know when the time is right." You get the feeling that they don't know either, because John Carpenter didn't know when he was writing it. Perhaps he thought it was obvious. We are aware that these people are studying the green ooze, but beyond that, it's anybody's guess.

There are a lot of scenes at the beginning where characters talk but we can't hear what they're saying. The ominous rock score plays over their dialogue, and at first we might be tempted to call this good filmmaking technique. It was admittedly a relief not to have the story outlined in banal exposition, the way it probably would have if this movie were being made today. But then it occurred to me that I didn't know what the hell these characters had to say in the first place, and that it didn't matter anyway. They're mere plot devices, and Carpenter's only reason for having so many characters in one relatively confined setting is so that he can kill off a bunch of them and turn those victims into mindless killers themselves, preying on the rest of the group. (This same problem of overpopulating the movie plagued Aliens, by the way. And later Prometheus.)

Prince of Darkness always seems to be building up to something, but that something never crystallizes. The movie just lies there. It's probably the Carpenter movie with the most talking. Is it ironic then that it's also the one that has the least to say? Perhaps Carpenter was just getting tired of thinking things out, or, more likely, this was a misfired attempt at doing something deeper conceptually. While I can't dismiss the movie as being self-important (it's far too ridiculous to be so), I certainly think that Carpenter was excited about some new-fangled scientific conceits and then wanted to distill them for us. This thrilling prospect gets in the way of the movie and becomes a clunky mechanism that keeps Prince of Darkness from being a success. The pulpy Los Angeles horror of Halloween and Escape From New York worked, and the fact that those movies were conceptually very simple and straightforward worked too. John Carpenter proves that ideas can actually get in the way if you don't know how to make them work for you. Christopher Nolan should watch Prince of Darkness (which is still entertaining in its badness) and take the hint.