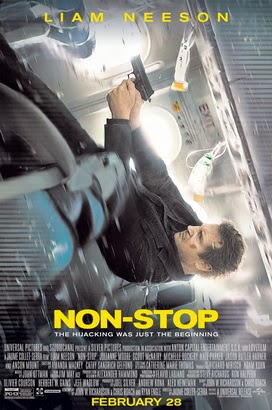 For about seventy-five minutes, Non-Stop is a tense, pleasing thriller about an alcoholic, clearly unstable U.S. air marshal (Liam Neeson) who's being taunted via cell phone by an unknown passenger aboard a plane bound for London. The creeping texter claims that every twenty minutes someone aboard the plane is going to die until 150 million big ones are wired to some mysterious bank account with lots of numbers.

As the put-upon hero whom almost nobody on the plane trusts, Neeson is powerfully grim yet heartfelt. He has qualities reminiscent of George C. Scott: the same kind of subtle command tinged with pathos is present in Neeson's facial expressions, particularly in his eyes. In the movie, he's unable to get over a personal tragedy. (Always the impetus for this kind of character's motivation. Cue eye roll.) And of course this predictably becomes a way for the villain to goad him and a way for him to find what Hollywood thinks of as redemption. (I'll give you a hint: he feels guilty about being an uninvolved dad and there's an innocent little girl aboard the plane who reminds him of his daughter.)

But after operating like an exciting modern-day Agatha Christie movie--Murder on the Transatlantic Airways--that left me quite giddy with happiness, Non-Stop veers into the nether-regions of a truly craptacular plot twist from which it never rebounds fully. Yes, I was happy with the movie overall, but the twist is so lame that it's a huge let-down, because the movie has shown us such a good time until then. It feels like lazy writing on the part of the three people who hashed out this sky-thriller. And maybe it was the best they could do--I promise not to reveal any big spoilers--with a premise like this. But if Agatha Christie could churn out like 90 of these thriller type novels, couldn't they get one script right all the way? (Granted, hers weren't all great either, but she nailed enough of them in the right places.)

But I cherished those seventy-five solid minutes. And I still think if you go out and see Non-Stop (which, given what else is available this weekend, is not a bad choice), you'll agree that the movie delivers a lot of fun suspense, even after the big dumb reveal. One more quibble: the passengers begin communicating with loved ones with their phones, which causes the story to leak, and soon they're watching live news coverage of their own hijacking (some kind of weird thrill) on the screens in front of them. This is supposed to be a jab at the bad reporting that can come of a 24-hour-news cycle, but Non-Stop is such a conventional thriller (in many ways, and despite being likable) that such commentary hardly registers.

As always, it's really great to see the lovely Julianne Moore, even if she's relegated to playing the den mother, standing by Neeson's character and helping out in his feeble investigation of the suspicious and understandably rattled fellow passengers. She does get some good moments though, and the chemistry between the two of them is nice and easy. I wish there had been more.

The supporting cast, which does a fine job, includes Michelle Dockery, Scoot McNairy, and Nate Parker. Directed by Jaume Collet-Serra.