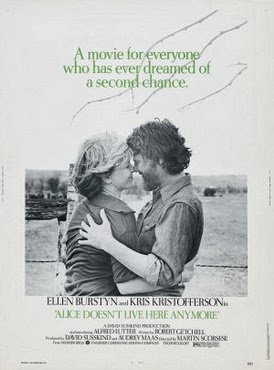 How many movies has Martin Scorsese made that were about women? The only one that stands out is Alice Doesn't Live Here Anymore (1974), starring Ellen Burstyn, whose performance is equal parts tender, histrionic, fraught, and courageous. She plays Alice Hyatt, a thirty-five year old housewife living in New Mexico. When Alice's husband dies in a work-related accident, she and her son Tommy (Alfred Lutter, who gives a delightfully cheeky performance) pack up and head for Monterrey, California. They're forced to make extended stops in Arizona in order for Alice to scrounge up enough money to get them to Monterrey, so she finds work as a lounge singer and a waitress.

There's a beautiful scene at the beginning of the movie where Alice sings and plays the Rodgers and Hart song "Where or When," and Scorsese lets us savor it. He cuts away as she's finishing, and we see her 12-year-old son pacing outside, feeling his own version of uncertainty while his mother dusts off her old talents. A few minutes later, another one: Alice and her neighbor/best friend Bea (Lelia Goldoni) tearfully part ways, and Bea cries, "Who's gonna make me laugh?" With very few words, this scene gets at the strong bond between these two women, whose feet have walked on virtually the same ground for all their lives. You feel a sense of compassion in this movie for its characters that just doesn't exist much anymore.

Alice has an easy, un-self-important quality to it. One of the problems with much of Martin Scorsese's work is that he's trying to top some other great film. Goodfellas was his attempt to top The Godfather, and most of Scorsese's recent efforts have seen the director once again striving for greatness in a very calculated way. But his earlier work doesn't have that quality. Even Taxi Driver, which I don't have any real affection for, is above that kind of posturing. Alice Doesn't Live Here Anymore works because it's about people and relationships. It's not "the women's lib picture," as though there could be only one and it had to be done by a man and it had to be great and it had to be Scorsese. These "women's lib pictures" represent a short-lived burst of activity on the subject. Nowadays, women have gone back to being the boring love interests and sub-important characters. But in the early to mid 70s, there were a few movies that were actually about women. And some of them may have been too generalized (as though there could only be one way to experience the world as a woman), but it was wonderful to see good movie roles for actresses.

When Alice moans, "I don't know how to live without a man," she's voicing the other side of the women's lib movement. She's spent much of the film crying herself into jobs and out of them, but her wise co-worker and chum (Diane Ladd) talks some sense into her. She's been in Alice's shoes already, and managed to walk her own path. Ladd makes a strong impression as the head waitress of a mom-and-pop restaurant where Alice finds a job. She's absolutely wonderful, embodying the brash personality of one of those blowsy talking flowers in Alice in Wonderland. Her big blonde beehive (which Jennifer Lawrence must have been imitating in American Hustle) looks like a giant dollop of cream: She's a tough, sweet gardenia with a strict no-bullshit policy.

Ellen Burstyn cries a lot in this movie, often in short but turbulent bursts. Sometimes it seems like Scorsese and screenwriter Robert Getchell thinking that's the only way a woman can accomplish anything: she must burst into tears to elicit a man's sympathy. And yet there's something real in her blubbering. It's messy and untempered. Burstyn has the looks of an accomplished actress, but she doesn't let herself rely too much on acting chops. She's all over the place in a good way, and she's got the look down pat: the scarves in her hair blowing in the wind as she and her son trek down the Arizona highway. Her son often seems unaffected by his mother's chaotic world, yet we see glimpses of their complex relationship that make it seem much more real than the garden variety sitcom-level familiarity present in most comedy-dramas. The chemistry between Burstyn and Lutter works: they play off each other nicely, and they switch from clownish pranks and smart-ass banter to genuine mother-son affection with surprising ease.