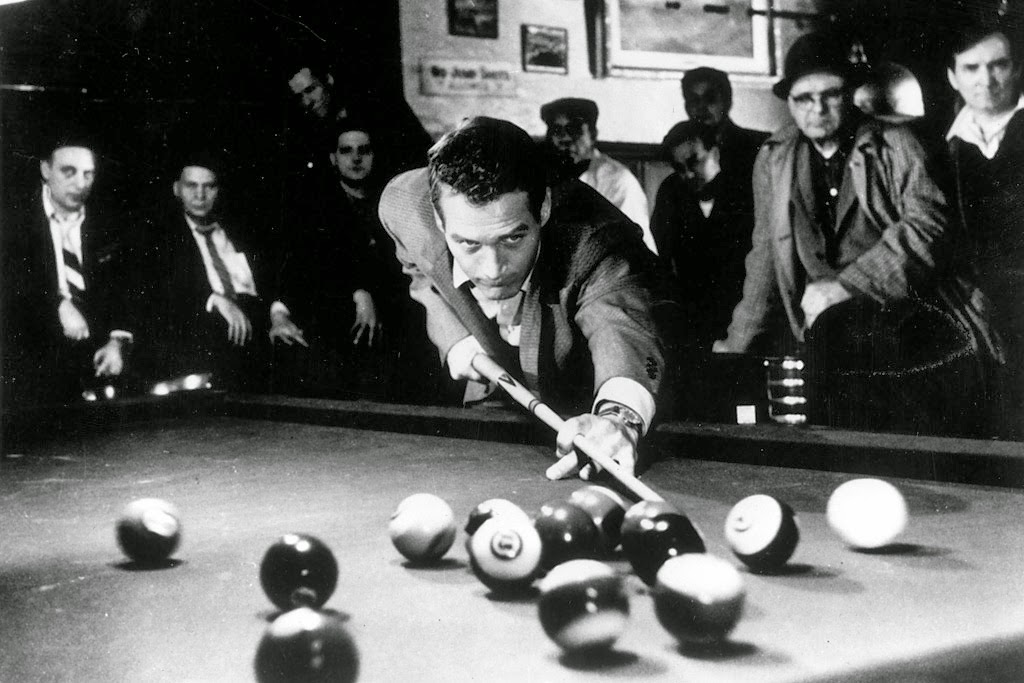 I've never responded to The Hustler (1961) with burgeoning enthusiasm, although I do think it's well-made and quite a good movie. It's also probably the film that solidified Paul Newman's place as a serious leading man, even though he'd already demonstrated his charisma, charm, and ability to keep an audience glued to the screen in movies like Somebody Up There Likes Me, Cat on a Hot Tin Roof, and The Long Hot Summer. I love the excesses of Cat and the sizzling Southern sex appeal of Summer. The Hustler is a more restrained movie in some ways (or maybe less over-the-top is the right way to put it), but it explores a number of grown-up issues fairly openly and in a nuanced way, so it's easy to see why it appealed to audiences and critics in 1961: it's a thoughtful if somewhat dated movie directed with taste and style and economy by Robert Rossen about a low-class heel named Eddie Felson, a pool hustler who, like any good addict, doesn't know when to quit. He longs to play against the allegedly unbeatable Minnesota Fats (played with his own brand of relaxed cool by Jackie Gleason). But when the two of them do play each other, Fats beats the pants of Eddie, only whetting his appetite for another shot at him.

What is admittedly fascinating about The Hustler is its exploration of damaged, addicted, pathetic people. Eddie--despite all his skill as a pool player and his boyish good looks and his happy-go-lucky charm--is a loser. (He's told as much by any number of the other characters in the film). And what's more, he's in complete denial about it. This makes him a perfect match for Piper Laurie's character, a drunk named Sarah whom he meets at a bus station one morning. They eventually go back to her place, and the world they forge together is one of excesses, a perfect breeding ground for unhappiness that's just drunk enough to pass off as contentment, until it's too late.

The Hustler represents the change Hollywood was undergoing in the 1960s: there's a kind of unmitigated darkness explored in this movie that you wouldn't have likely found--outside of a film noir, maybe--ten or fifteen years earlier. (And in the film noirs, that darkness was always stylized so that it felt fun and thrilling.) Here the darkness is real and pathetic and alarming, and this might explain why I've generally felt a bit detached from the movie. It's a sad film about sad people, yet this makes it quite believable, quite realistic, and what's more, it doesn't attempt to explain its characters or redeem them. We're not supposed to walk out of the movie feeling some kind of happy, chipper last-minute message about humankind being broken but fixable.

Piper Laurie really makes an impression in The Hustler: the minute she speaks--with that husky, deep, billowing yet soft voice--she's a presence, a kind of elixir that not even the charm of Paul Newman can temper. And Newman, who always exuded a kind of laid-back, indomitable likability, keeps up his end of the bargain here: he makes Eddie somehow acceptable, despite his flaws and the beautifully tragic imbalance of his life: he has such masterful control when he's hot, such absolute nothingness when he's not. It's a striking quality, and it's what makes Paul Newman such a noteworthy actor of his or any era.

The film is based on a novel by Walter Tevis, and it was adapted by Sidney Carroll and the director. The lovely jazz score was composed by Kenyon Hopkins. With George C. Scott as a rich businessman who becomes Eddie's manager, Myron McCormick as Eddie's former manager/partner, and Murray Hamilton. Followed by The Color of Money in 1986, which finally afforded Newman a long overdue Academy Award for Best Actor. (I think he should have gotten it for Hud.)
by Jacob Lusk @ pannedreview
Email ThisBlogThis!Share to TwitterShare to FacebookShare to Pinterest
Tags 1961, George C. Scott, Jackie Gleason, Murray Hamilton, Myron McCormick, Paul Newman, Piper Laurie, Robert Rossen