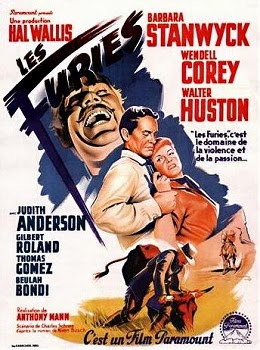 Barbara Stanwyck is one of the few actresses of her era that could be convincing in either an evening dress or a pair of cowboy boots, and in Anthony Mann's 1950 Western The Furies, she gets to do both. Stanwyck plays Vance Jeffords, the tenacious daughter of an arrogant, domineering, but likable rancher named T.C. Jeffords (Walter Huston, in his last film). Theirs is an explosive relationship, one that teeters between giddy, good-natured understanding and fiendish backstabbing. The Furies is the name of the ranch, which is situated in 1870's Texas, when the Mexicans were still making outrageous claims like, "Stop taking our land." (I know, really out of line. Just because they were there first they get to keep it?) Vance has a unique position in the ongoing quarrel between her father and the "squatters," a Mexican family named Herrera: she's in love with the eldest son, Juan (Gilbert Roland), although she's too aware of the realities of her world to do anything about it.

But don't misunderstand: The Furies isn't a weepy commentary on philistine social traditions. It's a study in the unfettered and usually cross-purposed ambitions of a father and daughter. T.C. has a son--played by the blandly hunky John Bromfield--but he's mostly in the background, doing what's expected, not making any waves. It's never even hinted that T.C. would entrust the Furies to him, because Vance always shows herself to be the most obvious and capable successor. That is until T.C. goes too far in his efforts to control his daughter, a struggle she constantly refuses to let him win.

People who think they understand gender roles or gender politics, both in real life and in the movies, should watch The Furies. If you think of old movies as purveyors of traditional gender roles, you should watch The Furies. You should take a good hard look at actresses like Barbara Stanwyck and Bette Davis and Olivia de Havilland, who almost always played strong women who refused to defer to the ignorant or just plain stupid designs of certain men in their lives.

The Furies also holds up quite well sixty-plus years later. It's an elegant western boasting some lovely night scenes in which the impressive Jeffords ranch is outlined by the rolling Texas canyons. There's something kind of gorgeous about that image, and it recurs throughout the Western genre. Director Anthony Mann and screenwriter Charles Schnee are smart enough to recognize the merits of their actors, and we get lots of good moments with them: the scissors Barbara Stanwyck clutches at the beginning of the movie (they're later brought back into the plot, making that little bit of foreshadowing almost Hitchcockian); the scene where Stanwyck sort of glides down the stairs in a daze after committing a particularly violent act, and the entire household watches in a kind of stunned reverential silence; the delightful Herrera matriarch (played by Blanche Yurka) cackling as she pushes boulders down a steep canyon onto the ranchers who have decided to oust the squatters for good; the delicious bits of dialogue that Stanwyck gets to say, like, "I hope you can chew what you just bit off."