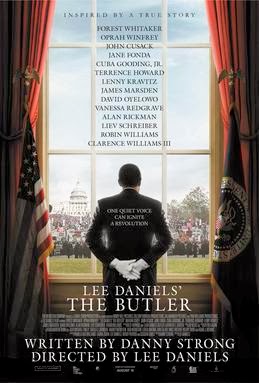 Surely we all know that the words "inspired by a true story" are themselves a kind of fiction when it comes to the movies. And yet many of us take things in movies as though they were courtroom documents, or "as trustworthy as the world almanac," to quote Bette Davis's character in All About Eve. Movies, of course, are master manipulators. That's one of their basic charms, and I generally don't hold their fudging against them in the slightest. But Hollywood's penchant for revising history does mean that viewers have to be able to separate fact from fiction, and it's rather bewildering that some people continue to accept movies as reliable sources. When it comes to details, they usually aren't. They're product designed to elicit emotions from our hearts and minds and money from our wallets. But in terms of getting the mood of a period and having it register in our minds, movies can be quite powerful and accurate. It is in this way that I think The Butler generally succeeds, especially where it lacks in getting certain details right. (This is to say that the screenwriters of The Butler deliberately altered things for their own dramatic purposes; not that they were bad historians.)

The Butler is hugely entertaining for what it is: a big movie with big emotions that tells a sweeping narrative of the last fifty years of American public life, looking specifically at the Civil Rights movement and a humble butler who serves seven U.S. presidents. His name in the movie is Cecil Gaines (the real man was named Eugene Allen), and he's played by Forest Whitaker. Whitaker plays Cecil with grace and patience. Enough grace and patience that his son sort of rebels, joining with the ranks of Martin Luther King and then later the Black Panthers because he feels that immediate action--not quiet reserve--is needed to facilitate cultural change.

Just a few mythbusters and then I'll move away from my "based on a true story" rant. Eugene Allen had one son, not two, and his son was neither a civil rights activist like the elder son in the movie nor a Vietnam vet like the younger one. Allen also started working at the Whitehouse earlier than the movie claims (but not as a butler, and not as head butler until 1981, five years before his retirement in 1986, which is one of the few correct claims the movie makes.) One of the most calculating changes that the filmmakers make comes in the son, Louis, who happens to be present during virtually every significant moment in the Civil Rights movement, including the Freedom Riders bus ride through Alabama (the one where they're attacked by a seething mob of KKK and non-KKK racist nutjobs) and the assassination of Martin Luther King, Jr. Then he even becomes a Black Panther (briefly). It seemed too Forrest Gump-ish to me. (Forrest, you remember, seemed to witness an incredulous number of cultural and historical moments.)

The film very obviously tries to juxtapose Cecil Gaines--who does what is expected of him very well, and considers this a subtle contribution to the march for equality--and his son Louis--who's fed up with being subservient to snooty white racists and wants change. It allows the movie to have some kick to it, even if this kind of plotting feels too convenient. Moreover, the differences between the two men really put Forest Whitaker in the background of his own movie. His is not the face I see as I think about The Butler. I see Louis, I see the cartoonish representations of the U.S. Presidents (from Eisenhower to Reagan, but skipping Ford and Carter), and I see Oprah.  (There is, however, real passion and command inside of Forest Whitaker, and he's able to get some of that out in the second half of the movie.) Given the film's colorful array of characters, it's really an unfair disadvantage.

Those presidents are something else. Robin Williams plays Eisenhower; James Marsden, JFK; Liev Schreiber, LBJ, John Cusack, Nixon; and Alan Rickman, Reagan. (Jane Fonda also makes a cameo appearance as Nancy Reagan.) They're quite an impressive group of actors, and even if their impressions don't always work, they're fascinatingly gauche and/or dead-on. Marsden is surprisingly good as JFK; Rickman really nails Reagan; and Cusack is creepily off-kilter yet somehow right as Nixon. (There's also the added pleasure of seeing LBJ scream at his subjects while on the toilet, with the bathroom door wide open.)

And I would be remiss if I didn't mention the performance of Oprah Winfrey as Gloria Gaines, Cecil's devoted wife. Oprah's performance is wonderful, and makes you wish she did more movies. Gloria is a boozing but still loving wife, and Oprah's performance brings a lot of humor to the movie that it desperately needs. The Butler isn't a downer (although it's infuriating at times to see how awful black people were treated at this time, and may still be treated today in certain circles), but it is more than a bit self-important. Oprah, who often comes off as self-important when she's giving away free cars to every person in her audience, here appears grounded and real in a way that is vital to the success of this movie. She's also a great balance to the measured, polite character of Cecil. Gloria doesn't care about pleasing people. Yet she's not brash or obnoxious, and her support of her husband is quite touching at times.

Viewers are likely to walk away from The Butler with a sugar-coated lie in their heads. Now that we've got a black president, it's all good. Racism against black people in America is over. (The movie doesn't do anything to counter this.) And what's more, The Butler has spent two hours showing us the general failings of U.S. presidents, only to rejoice in a kind of enchanted, unrealistic way at the election of a black one. President Obama's election was a big deal, of course, in a symbolic way, but the reality of being a president is a lot more complicated and unflattering for anyone who's tasked with the job. (And for the record, it's always been this way. Presidents rarely get something done quickly, for better or worse.) The Butler isn't interested in showing us that. I'm content with the movie as it is, but I worry that some of its sloppiness will eventually be used in classrooms as pure fact.
by Jacob Lusk @ pannedreview
Email ThisBlogThis!Share to TwitterShare to FacebookShare to Pinterest
Tags 2013, Alan Rickman, Alex Pettyfer, Cuba Gooding Jr., David Oyelowo, Forest Whitaker, James Marsden, Jane Fonda, John Cusack, Lee Daniels, Liev Schreiber, Oprah Winfrey, Robin Williams, Vanessa Redgrave