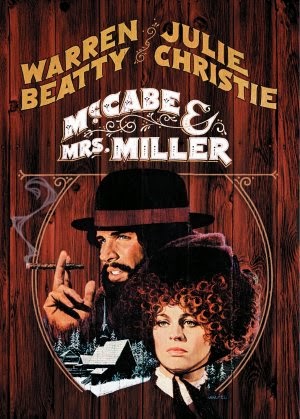 McCabe & Mrs. Miller (1971) is one of those movies people talk about with such reverence and enthusiasm that when you actually watch it, you may be surprised by how underwhelmed you feel. I can't say that I hated the movie, and believe me, I was sure that I would hate it. Actually, there are a few things in McCabe that are quite well-done, especially the tense, unnervingly quiet showdown which takes place in the last twenty minutes or so of the film. But I found much of the movie only moderately interesting.

McCabe & Mrs. Miller is a frontier movie, directed by Robert Altman and written by Altman and Brian McKay. (They adapted it from the novel, McCabe, by Edmund Naughton.) I kept wondering why they bothered to change the name to include Mrs. Miller, who's a madam played by Julie Christie. And although part of the film is about Constance Miller opening up a well-to-do house of prostitution with her business partner John McCabe (played by Warren Beatty), her character comes off as second-tier by the end of the picture.

Perhaps it's the spare dialogue and the film's overall rustic aesthetic quality. In a way, everybody is second-tier in a story like this, because ultimately it's just as much about the location, the Northwest in 1902 and how damned hard it was to live there. I will say this for Altman: he certainly knows how to deromanticize a genre. He did it to the film noir in The Long Goodbye, to the comedy in M*A*S*H*, and to the American country music scene in Nashville. That is partly why Altman's 1970's films are so highly regarded: They represented all that the new cinema had to offer at its peak, which is to say they both critiqued and re-invented the old genres that perhaps had become stale and trite to audiences. (I don't mean to suggest that that's all Altman's films did, but I must admit that many of them have more than a little disdain for their ancestry.)

I tried to imagine what it would have been like to see this movie upon its initial theatrical release over forty years ago. The seemingly sudden changes in American movies was both exciting and unsettling, depending on whom you asked. And they were changing just as surely and as rapidly and as intensely as American culture had changed, almost erupting in a kind of frenzied maelstrom. No one quite new what was going on, but I think many movie-lovers felt an incredible relief: the dust which had settled was not only being shaken off, but the whole damned floor was being ripped out, and it seemed like there weren't yet any new ground rules. So for someone like Robert Altman, whose work thrived on a kind of austere yet rich naturalism, this was lovely timing. It didn't last very long, but for a while Altman was one of the darling auteurs of American film, and even if every new and exciting idea wasn't a diamond, the fact that new and exciting ideas were being thought up and turned into feature films at all was revolutionary.

Forty years later, McCabe & Mrs. Miller still has power in it. In some ways, it's less dated than ever. But I also felt unaffected by the movie. I didn't have much interest in the characters or the world they were creating, and while I appreciated being shown just how unappealing a rustic township is to create, I found myself yearning for the maudlin insincerity of The Long Goodbye, or even the tender-hearted tendrils of Nashville. Altman's work has always been something of an uphill battle for me. I remember being totally mystified by Cookie's Fortune, which I rented in 1999 because I love Julianne Moore's acting, and then utterly perturbed by the quasi-mystery Gosford Park in 2001. (I was expecting Agatha Christie, and then I had to turn on the subtitles because the thick English accents were so difficult to understand.) As of right now, I'd still put The Long Goodbye as the best of Altman's movies that I've seen.

If someone were to remake McCabe & Mrs. Miller today, I'd want that great hipster folk band Fleet Foxes, with its rich, textured sounds, to do the music. McCabe is a Fleet Foxes kind of movie. That opening scene of Warren Beatty traveling to the flop house with the lilting, sorrowful Leonard Cohen song keeping time is quite magical in its own way, just as magical as the snow falling upon the burgeoning little town of Presbyterian Church (a comical name that for some reason made me think of the Canadian city of Medicine Hat). Yes, there is something to McCabe & Mrs. Miller, although I'm not entirely sure what it is.