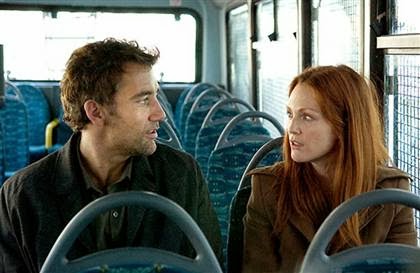 Children of Men (2006), directed by Alfonso Cuarón and based on the novel by P.D. James, is a murky slog through the wastelands of dystopian future England, which, in the year 2027, is the only country that hasn't completely collapsed due to war and disease. The planet is also enduring a new kind of crisis: infertility. No babies have been born for nearly twenty years, so when a radical group of activists finds a pregnant Fuji woman named Kee (Clare-Hope Ashitey), her safe transport to a humanist group--where her baby won't be exploited as some kind of marvelous new savior--becomes of vital importance. Enter Clive Owen, a British government worker who has ties with the radical group's leader, Julian (played by Julianne Moore). He's enlisted to give them some help in getting papers for Kee so that she can get where she needs to go. Of course, there are complications.

This is a movie full of dreary--and mostly unoriginal--predictions about the future. Cuarón lets loose with the mayhem, and uses impressive camera-work to exhibit the constant chaos of bombs going off, guns firing, bodies broken by glass and bullets and crumbling buildings, towns destroyed, and thick clouds of fog and smoke obscuring the vision of the protagonists. It's a world that becomes increasingly unwatchable as the movie winds on.

Dystopian fiction isn't exactly a new thing, but it's certainly experienced a new wave of enthusiasm in the last ten years or so. The British experienced a parallel kind of anxiety about their security at the turn of the twentieth century, which gave us Dracula, The Time Machine, and lots of other literature about the deterioration--social, moral, and biological--of society. H.G. Wells imagined England in somewhat more banal, yet far more accurate, terms in Tono-Bungay (1909), which chronicled the disruptions in the English social structure and the rise of urban civilizations. People were afraid of all the changes that were happening, which of course preceded the very big and grim change affected by World War I. 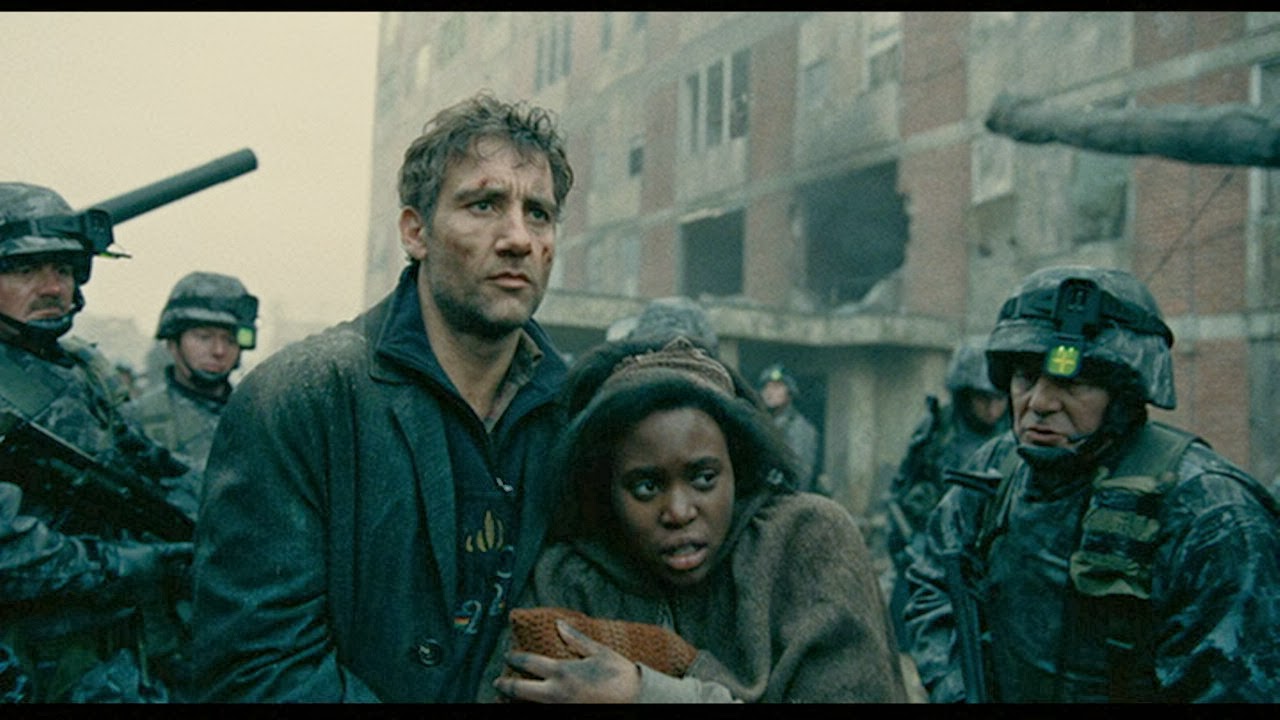 It's the same recipe bubbling up now in 2014. We live in a world of uncertainties, and the grim futuristic novels and books are glutting the market to exploit/ameliorate/fuel that anxiety. Children of Men is simply a more artful and adult version of the same thing young people love about The Hunger Games: this is a world where man's brutality has been unleashed in an uninhibited and obvious fashion, and this kind of sheer inhumanity has always grabbed people's attention. Perhaps people respond to these kinds of movies because they want confirmation that we're not so brutal here and now. Things may be bad, but they aren't that bad at least. But the people in Children of Men have the news on 24/7, which isn't much different from people now who always have the television tuned to Fox News or CNN, which are more Orwellian than people want to believe. They're the ones who feed the dystopian imaginations, and give credence to movies like Children of Men.

I found it too depressing and chaotic to care about Children of Men, and what's more, frustrating, much like Caurón's Gravity frustrated me. Here there were little things--the jarring sound of someone pounding on a door and Clive Owen taking forever to open it; that stupid little yippy dog sniffing the blanket covering the baby, whose identity Kee is trying to keep secret; the way the characters plod through bomb-riddled streets and stairways and are constantly impeded by some irritating obstruction. I suppose this is Caurón's attempt to be realistic, but it pulled me out of the movie and built up a kind of resistance in me. After a while, all patience was gone.

Clive Owen is a likable actor, and his presence bolsters Children of Men considerably. But he--like everyone in this movie--is a function of the plot, not a real character. We care about his safety mainly because he's Clive Owen. You can imagine that the author of the novel, P.D. James, had the idea about the infertility first." Suppose women just stopped being able to give birth?" Obviously, what once mattered to society would no longer matter. But the problem with these kinds of conceits is that by definition they make characters incidental and subordinate to the story. Everything must flow from that little nucleus of an idea about infertility, and while it's an interesting idea, it's very Twilight Zone-y, except Children of Men is bigger and glossier and gritter than The Twilight Zone.

Michael Caine has a small part as an aging hippy with John Lennon's hair--if Lennon had lived long enough to turn grey--and glasses. He tries very obviously to be a quirky old man, and his comic relief never really works. It always seems forced and naively at odds with the rest of the movie's grim march toward a kind of shriveled, bleak self-importance. With five writers, you'd expect something better from Children of Men. Or maybe that was the trouble. Along with the director, the script was pounded out by Timothy J. Sexton, David Arata, Mark Fergus, and Hawk Ostby. With Chiwetel Ejiofor, Pam Ferris, and Danny Huston.
by Jacob Lusk @ pannedreview
Email ThisBlogThis!Share to TwitterShare to FacebookShare to Pinterest
Tags 2006, Alfonso Cuarón, Chiwetel Ejiofor, Clive Owen, Julianne Moore, Michael Caine