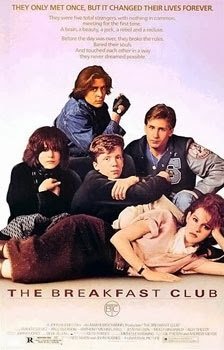 I can't remember the first time I saw The Breakfast Club (1985), but I know I was younger than the intended audience by more than a bit. And I do remember the blank videocassette tape on which we recorded the movie via TBS, so that all the swear words were edited out. It's the kind of film that seemed emotionally raw to me as a child. Now that I'm an adult, the obvious commercial aspects of The Breakfast Club are apparent. It seems more than a bit calculated to appeal to the egos of bored, spoiled American adolescents who hate their parents, and I think in that respect, The Breakfast Club errs.

I'm not exactly making a novel point here. Many critics before me have noticed that this movie inflates the problems of young people in order to draw them in. And yes, it does do that. It's kind of an odd trick, this idea of luring viewers in via flattery. It may bespeak a lack of confidence in what this movie has to offer that's actually real and true and funny, which is the fresh-faced cast. But despite its flaws, there's something to this movie, a kind of alchemy that exists in spite of its singular movie studio marketing designs on its audience. And I'd be willing to bet that teenagers of 2014 (I almost wrote 2013!) could still relate to the five kids in what may be writer-director John Hughes' most iconic film. (What's more iconic than Judd Nelson raising his fist in the air as the credits role, ticking away to that grand Simple Minds song, "Don't You Forget About Me"?)

Beneath the commercialism, there are five characters who come to life thanks to the performances of Nelson, Molly Ringwald, Emilio Estevez, Anthony Michael Hall, and Ally Sheedy, all of whom--as most of us already know--embody various American teenager stereotypes, gathered in the library of their suburban Chicago high school for Saturday detention. There's the jock, the spoiled girl, the bad boy, the nerd, and the consummate weirdo.

The latter is played by Sheedy. I really just have to stop and talk about about her performance for a moment. I've always liked Ally Sheedy--I even had a little crush on her as a kid--and I always feel validated when a critic likes her performance in this movie. It's the most authentic performance in The Breakfast Club, and when everyone else gets involved in big speeches full of emotionally charged dialogue, Ally Sheedy's off in her own little world doing something joyfully weird. She confesses late in the movie--after everyone else has been bearing their decidedly much younger souls--that she came to detention because she didn't have anything better to do. It's a refreshingly unexpected confession from a movie that's chock full of confessions of a lesser, more obvious kind. Sheedy saves this movie from being totally pre-fab.

I think that when it comes to comic/dramatic perceptions of high school culture and adolescent malaise, Sixteen Candles holds up as the better John Hughes film. But The Breakfast Club still works nearly thirty years later as a kind of Hollywood product's idea of what it would be like to be an alienated teenager. It's as much a part of its decade as Rebel Without A Cause is a part of the 1950s, and you really have to have grown up on the movie to appreciate it. That or you have to love the movie's over-the-top drama, which John Hughes still manages to reign in to a degree. (It's the opposite of what happens in the movie St. Elmo's Fire, which got completely away from its director, and which stars three of the actors from this film.)

Paul Gleason plays the dean, a contrived villain whose badness unites the five disparate students: They may not like each other much, but they're in accord with their disdain for him. The dean doesn't see them or care to know them as human beings, and as a teacher I resented him because I don't think every teacher is like this. Granted, there are plenty of them--desk jockeys who teach for the summers off and despise the kids more and more every year--and maybe John Hughes was right to make this guy such a dick. But I also think he's a convenient obstacle for the kids to overcome and be drawn to each other. It's as if John Hughes were trying to say, "See? I get how awful grown-ups are." He prompts what may be the most ridiculous line in the movie, uttered by Sheedy's character: She says that when you grow up, "your heart dies." Is it a youthful exaggeration or some kind of brilliant, cynical truth? Maybe a little bit of both. The Breakfast Club is at least a happy reminder of how movies used to be: unashamedly dramatic and funny at the same time without a shred of that abysmal self-awareness that plagues current cinema. ★★½
by Jacob Lusk @ pannedreview
Email ThisBlogThis!Share to TwitterShare to FacebookShare to Pinterest
Tags 1985, Ally Sheedy, Anthony Michael Hall, Emilio Estevez, John Hughes, Judd Nelson, Molly Ringwald, Paul Gleason