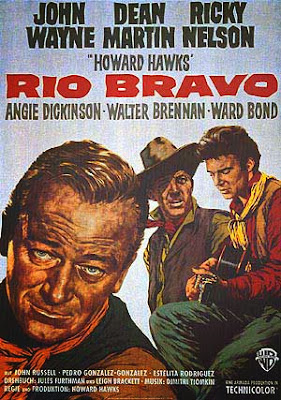 Rio Bravo (1959) is a likable western. I mean, can you ask for anything better than a movie that features Dean Martin manfully purring a country western song while Ricky Nelson plays guitar and sings harmony? The film has that wonderful Howard Hawks feel to it: Hawks was a master at making movies that felt like movies. This Western has a kind of silky, easy-going quality. It's like a polished, funnier, less sentimental episode of Gunsmoke, and the actors are such fun that you're likely to enjoy Rio Bravo even if --like me-- you don't particularly love Westerns.

Of course, there's John Wayne as the sheriff of Rio Bravo, guarding a prisoner whose brother has hired a whole cadre of bandits to help get him out of jail at any cost. Dean Martin plays the drunk deputy who's becoming a laughingstock in town, but who finally finds his courage. Martin feels perfect for this role. Rick Nelson plays a teenager who's quick on his feet and a good shot; Walter Brennan mugs incessantly, as the old croney who guards the jail while the others are out on the town. And then there's Angie Dickinson, the sexy, sultry, jaded, resourceful new girl, who finds herself falling for the Duke.

It was interesting to see Rio Bravo in light of the fact that John Carpenter used this film as the basis for his Assault on Precinct 13 (1976), which I've seen several times. There's a definite similarity in the two movies, but I was happy to see that Carpenter still managed to make his own movie. Rio Bravo doesn't get as much critical attention as films like The Searchers and The Wild Bunch, but I enjoyed it a hell of a lot more than either of those two films. It isn't reaching for anything: it's just out to entertain us.