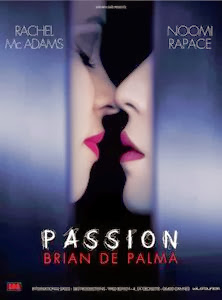 It's a shame that nobody has seen Brian De Palma's latest exercise in mania, Passion (2012), because it's a pretty entertaining piece of trash, in line with all those ultra-stylish thrillers De Palma made in the 70s and 80s. He got sidetracked doing more "important" work in the late 80s and into the 21st century. Passion suggests that maybe we're getting our old De Palma back.

Now don't misunderstand me. Passion isn't a great film, not even a great De Palma film. But I think it's been unfairly panned by critics. Its score on Rotten Tomatoes is a dismal 16% among the top critics. Richard Brody in the New Yorker called it "a collection of mechanisms that decorate mechanisms." And Rene Rodriguez in the Miami Herald asserts that De Palma has "run out of ideas." And I would have to agree with these and other critics up to a point. There's nothing particularly new about Passion. (And in fact, the film often feels calculating and subdued: it lacks the frenzy of Sisters and the delightful, lascivious twistedness of Dressed to Kill.) But as an exercise in mindless semi-stylish cheap thrills, Passion works pretty well, and De Palma still knows how to create a lush thriller replete with sexy, dangerous weirdness.

The plot involves the catty chicanery of two women working at an ad agency in Berlin. Rachel McAdams plays Christine, the bitchy, controlling go-getter who takes credit for a video that Isabelle (Noomi Rapace) shoots. The one-ups-woman-ship then escalates, and until somebody gets murdered. But first we're asked to believe that perhaps every attractive woman on the planet is willing and able to be a lesbian on command. (Brian De Palma was never able to shy away from his fantasies.) But to De Palma's credit, he doesn't exploit this fantasy as much as he may have wanted to. (The film is nowhere near as steamy as Dressed to Kill, for example.)

Again, I don't mean to suggest that Passion is a work of genius. It's a work of amusement by a director who has in his prime made some pretty ingenious movies. And it's fun to see Rachel McAdams playing a bad girl again. Noomi Rapace is a mildly convincing tragic figure in this, but she already looks so forlorn and nymph-like, that I wish De Palma had cast someone against type.