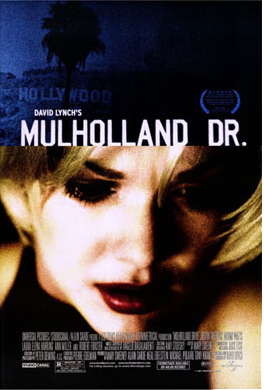 Can a film be both lucid and confusing? After watching Mulholland Drive (2001), I would say absolutely. It's one trippy movie from the mind of writer-director David Lynch. Mulholland Drive is the kind of film that people will either love or hate, depending on what they want from a movie. I was starting to hate it about three-fourths of the way through, when it became apparent that the seemingly nonsensical plot was not going to be resolved in any clear or definitive way. But then something occurred to me. You know when you're trying to explain a dream you had to someone else? Your dream is always full of contradictions and seemingly bizarre details that--while in the dream--you generally accept as "normal," even if some small part of your rational mind is vaguely aware that what's happening isn't normal or logical at all. That's what Mulholland Drive is. It's a film that wants to show us the illogical, bizarre world of dreams, only played out in reality. It's a hypnotic, weird, thrilling, creepy, sometimes banal, often confusing, but never truly incoherent film.

It would be easy to believe that such a non-linear movie just got away from the reigns of its director, yet you get the sense that Lynch knows pretty much what he's doing, even if only at an intuitive level. (I suppose if you're trying to make a movie that portrays the illogical nature of dreams, you wouldn't want it to be too worked out in advance. That would defeat the purpose.) Apparently Lynch planned for this to be a television series, but then morphed it into a feature film when that initial project fell through.

The basic plot involves a beautiful brunette (Laura Harring) who loses her memory after a car crash and wanders into the apartment of an older woman who's away. The woman's niece, Betty (Naomi Watts) has arranged to stay in the apartment while she tries to break into the film business. Naturally Betty is surprised when she arrives and finds a complete stranger (the amnesiac) taking a shower in her aunt's apartment. But the mystery of this girl with no memory fascinates Betty, and she takes the girl (who calls herself Rita, after glancing up at a framed poster of the 1940s film noir Gilda, starring Rita Hayworth) under her wing. (You get the feeling that Betty's obsession with finding out this girl's identity is more important to her than to Rita.)

But there are other stories happening in the world of Mulholland Drive, and you're never quite sure of the relationships between them, except that some of the stories do intersect, only in unexpected ways. There's a film director played by Justin Theroux who feels his creative control being usurped by ominous studio heads. (Lynch's blatant cynicism--hard to dismiss because it's so justified--about the Hollywood system shows itself here.) It feels paranoid and conspiratorial and believable. Not only that, but Betty's dream of breaking into the movie business is tinged with a kind of creeping horror. Lynch has created an amalgam of Hollywood stories (the struggling director, the wide-eyed girl fresh off the plane trying to make it in the movies, the sexy, mysterious femme fatale) and turned them into nightmares. Hollywood itself becomes this throbbing demon that perpetrates vague but terrifying horrors on various people. (There's yet another subplot about a screenwriter who's shot by a hitman. And some others too, but I won't go into them for fear of spoiling some of the stranger twists of the movie.)

A few years ago I would have hated Mulholland Drive, because it resists giving us any kind of explanation. It's audacious, to be sure, maybe even full of itself. (And the lesbian sex scene left me feeling disgusted with David Lynch, because it did seem like he just wanted to film to attractive ladies getting it on.) But despite my qualms with the movie, I can't deny that it has an intense, arresting power to it: you feel completely absorbed in its bizarreness, and I've seen very few movies that so successfully captured the oblique qualities of a weird yet vivid nightmare.