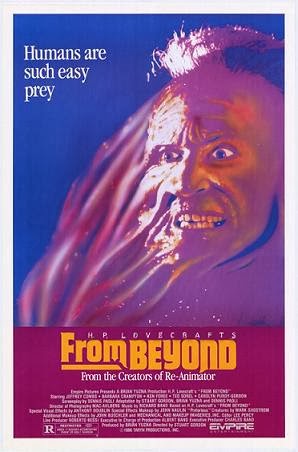 From Beyond (1986) is director Stuart Gordon's follow-up to Re-Animator, and it's a misfired attempt to see if lightning can in fact strike twice. You know you're in trouble when the source of the conflict and the horror is a device that, when turned on, unleashes a monstrous power from another dimension. I mean, all you have to do is not turn it on, right? Problem solved. So how to get the characters in the movie to keep turning that sucker on...

The characters are not that far removed from Re-Animator. There's a nerdy researcher played by Jeffrey Combs, and a self-important psychiatrist played by Barbara Crampton (who is once again molested on camera by a terrifying creature), and an overly good-natured cop played by Ken Foree who's hired to accompany the other two to an isolated house where they can observe a strange contraption known as the Resonator. The Resonator is a big metal, phallic-looking machine that, when switched on, reveals slimy, snake-like, floating creatures that can attack if they detect humans. The machine's creator, the eccentric, kinky Dr. Pretorius (Ted Sorel), is ostensibly beheaded by some creature accessed via the Resonator, but then we discover that he's actually been pulled into another world and is now an extremely powerful, shape-shifting creature with mind-controlling abilities.

I'm sure you're as riveted reading about this as I was watching it. The whole thing feels absolutely ridiculous, but not in a good way. There's not enough humor in From Beyond, and the movie relies on the stupid decisions of its characters to tell its story. The only character I liked--Ken Foree's--is poorly conceived, but at least has the good sense to utter the line that dogs so many possessed house movies: "Let's get the hell out of here." (Or some variation of that.) But Barbara Crampton can't leave, because she's doing important work. And Combs's character comes off as a weakling who has little if any influence in this story. He's absolutely forgettable.

As with Re-Animator, there's an attempt to shape an H.P. Lovecraft short story into a compelling horror film that mixes icky gore with clever humor. Unfortunately, From Beyond retains little of that film's novelty. It's structurally a bit of a remake of Re-Animator (and fans of the 2006 horror-scifi film Slither may find in From Beyond some intriguing parallels), but being like Re-Animator isn't enough. It's nice to see a director who can turn more than one trick. If that's asking too much, then the same trick has to be fresh enough for a second go-round. This one turns out a dud. Written by the director, Dennis Paoli, and producer Brian Yuzna. ★½
by Jacob Lusk @ pannedreview
Email ThisBlogThis!Share to TwitterShare to FacebookShare to Pinterest
Tags 1986, Barbara Crampton, Jeffrey Combs, Ken Foree, Stuart Gordon