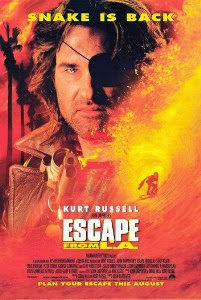 At some point during the film, one character says to another, "this is insane!" To which the former replies, "that's the point." That brief exchange is a pretty good summation of John Carpenter's Escape From L.A. (1996), which is far more of an exercise in ridiculosity than its predecessor, the slick, moody urban action thriller Escape From New York. Kurt Russell returns as Carpenter's most memorable anti-hero, the eye-patch wearing, John Wayne-esque Snake Plissken.

Escape From New York was set in 1997. L.A. is set in 2013, and the U.S. is now ruled by the religious right to the point that the president, a fundamentalist Christian, has been allowed to alter the Constitution so that he can be President for life. His daughter, in a quasi-Patty Hearst move, rebels against him by stealing a device that could shut down all power sources across the globe. Then she trots over to L.A., which, after a massive earthquake separates it from the contiguous United States, has become the new dumping ground for America's undesirables (atheists, Muslims, criminals, people who cuss, etc.). There she meets up with the gangster who runs L.A., a former Peruvian terrorist named Cuervo Jones (Georges Corraface).

Did I mention that the president's daughter is named Utopia? Did I mention that Snake Plissken rides a tsunami into the streets of L.A. along with an aging surfer who's played by Peter Fonda? (Perhaps being really laid-back is a moral crime bad enough to warrant exile in Los Angeles.) Did I mention that Escape From L.A. is just about the craziest movie in the history of cinema? Or at least of the 90s.

You really can't do anything but cheer for a movie that so proudly pursues insanity as the order of the day. You get the sense that this is not simply John Carpenter cutting loose. This may be the official moment when Carpenter just stopped giving a shit. (Although some of his previous work might suggest otherwise.) But despite that decidedly double-edged compliment, I'm actually trying to laud the man for showing us such a hacky, cheesy, singularly wacked-out good time. Carpenter, who wrote the script with Kurt Russell and Debra Hill (both of whom produced the film), has always had this kind of B-movie sensibility. But his B movies (aside from the 1974 Dark Star) had a sort of polish to them, mostly due to the fact that Dean Cundey was his DP from Halloween to The Thing. L.A. eschews that polished look, whether accidentally or on purpose, and we get something altogether different. (The special effects are laughable, but somehow mesmerizing.)

I did wish that the female characters were more interesting. Utopia is kind of strong, and there's a girl with some pluck who tries to help Snake early in the film, but she's dispatched rather quickly. You long for Adrienne Barbeau to show up and show 'em how it's done. Pam Grier does make a flashy appearance as a transvestite. (Her voice has been altered, but it comes off as a stupid machination. Grier's real voice is commanding, and it's a shame we don't get to hear it as it is.) There's also a pretty colorful role for Steve Buscemi as a weaselly "agent" who still tries to get work in the new, disheveled, post-Hollywood L.A.