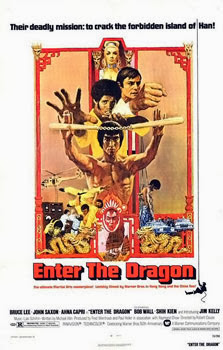 I must confess that I've seen only one other proper kung fu movie in my life, Kung Fu Hustle (2004), which I remember liking a lot. But I have to admit that kung fu isn't my genre of choice. Nevertheless, I enjoyed Enter the Dragon (1973), which is by many accounts one of the great kung fu movies. It's certainly iconic, thanks to Bruce Lee, whose charismatic presence imbues the picture with a kind of mythic enchantment. Bruce Lee seems to wander through this movie like a man in search of his destiny. The picture in some ways happens around him, and he shows up at important moments to either display his impressive ass-kicking skills, or move the plot along (which usually involves the ass-kicking skills).

The film is mostly set on an island near Hong Kong which is inhabited by a man named Han (Shih Kien), who is some kind of rogue kung fu master. Han has departed from the principles of the masters that trained him, much to their chagrin and embarrassment. Not only is Han something of a megalomaniac, he's also a killer. Many young women have ventured onto his island never to be heard from again. Enter Bruce Lee, who is sent to ostensibly take part in Han's big tournament--which he hosts on the island every three years--but really to uncover one of the missing girls, an agent named Mei Ling (Betty Chung), and any information he can get his hands on.

Lee is joined by two other martial artists who are also being enticed to the island, for different reasons: they're played by John Saxon and Jim Kelly. The three of them never form what you might call an official trio, but they do share some common bonds, and as such, you're rooting for them as a group. Plus, John Saxon and Jim Kelly have their own screen presence. Saxon has a funny scene early in the film where he outsmarts three bodyguards on a golf course, and Kelly more than anyone looks like he's having a really good time.

I must admit there were moments in Enter the Dragon where I grew restless. Director Robert Clouse and his editing team could have cut the movie by ten minutes for a more compact picture. But as it goes, Enter the Dragon is a pretty enjoyable piece of bubblegum, and better-made than most of its kind. What impressed me most were the film's sets and the admittedly astonishing staging of the fight choreography, by Bruce Lee. There is one scene in particular that stands out: it's when Lee sneaks out of his room at Han's giant compound and searches the place, eluding multiple guards and fending off several of them. He's lithe and subtle and incredibly deliberate in every physical action he makes. It's really a fascinating scene to watch. (And what about the scene where he captures the cobra and uses it to scare off some guys in a control room?!)

Enter the Dragon is certainly worth seeing, especially if you're interested in furthering your appreciation for genre films of the 1970s. There's something about them that feels so much more authentic and fun than the films that imitate them today. One of the drawbacks of having all these fanboys making movies today is that they're so busy paying homage to the films they loved that they forget that what made those films special was (at least partly) their originality. Nowadays, it's like every genre piece is making some kind of blustering "meta-commentary." Sometimes I just want my films to be films. So thank you, Enter the Dragon, for falling into that increasingly more endangered category. With Ahna Capri and Robert Wall. Sadly, Lee died shortly before the film's release. ★★★
by Jacob Lusk @ pannedreview
Email ThisBlogThis!Share to TwitterShare to FacebookShare to Pinterest
Tags 1973, Bruce Lee, Jim Kelly, John Saxon