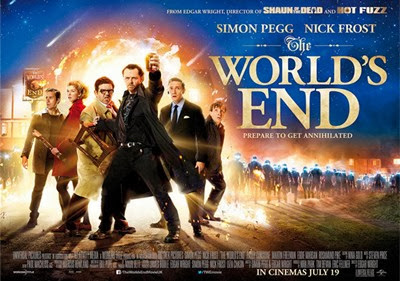 Third go-round for director Edgar Wright and stars Simon Pegg and Nick Frost (the first two being Shaun of the Dead and Hot Fuzz). The World's End, like its predecessors, is the product of nostalgia for pop culture. Where Shaun poked loving fun at zombie movies and Hot Fuzz at buddy cop flicks, World's End takes as its genre of choice the pod people of Invasion of the Body Snatchers, The Stepford Wives, etc.

Pegg plays Gary King, a ne'er-do-well who decides to reunite his buddies and return to their hometown to visit all twelve of its pubs--a feat known as the Golden Mile--only to find that his buddies have moved on with their lives, leaving him snugly ensconced in the past. But against their better judgment, they acquiesce, and find themselves back in their cozy, boring hometown of Newton Haven, a small village presumably near London. But something has changed: the people seem different. (I think you know where this is going.)

As fans of this team may by now expect, this is an exuberantly funny send-up, with the usual not-that-subtle social commentary that Wright and Pegg (who co-wrote the script) like to insert into their movies. But above all, it's fun, a quality that's lacking in too many movies these days. So while the themes aren't as fresh the third time around, and the jokes and even some of the filmmaking techniques (like those little montage scenes so characteristic of Wright's work) are more obvious, more tried and true, The World's End delivers an entertaining celebration of ridiculousness that fans of this particular genre should find enthralling. And the beams of light that emanate from the faces of the mind-controlled-robot-pod-people-things create quite an effect, not to mention the almost brilliant but just insane enough to be hilarious philosophical debate at the climax of the movie (between our heroes and whomever is the king of these mind-controlled-robot-pod-people-things--his voice being supplied by Bill Nighy.)