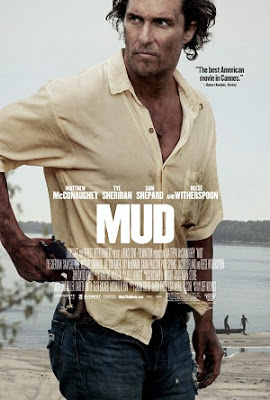 Grit with heart. Mud feels very Mark Twainish: it takes place in De Witt, Arkansas, along the Mississippi River, and the two boys at the heart of this film could be Tom Sawyer and Huckleberry Finn: one wants to view the world with romantic eyes--despite the fact that his parents are splitting up--and the other is a realist, an orphan being raised by his uncle. Their names are Ellis (Tye Sheridan) and Neckbone (Jacob Lofland), and they spend their free time roaming the river and exploring all the little islands that populate it. (Twain made these islands central sites of adventure in his books, and they were indeed very much a part of his own childhood.)

On one of these islands, the boys run into Mud (Matthew McConaughey), a man on the run. He becomes endearing to them, and they help him rebuild a junked up boat by procuring spare parts from various junkyards across town. But the police and some bounty hunters are looking for Mud, and there's a girl named Juniper (Reese Witherspoon) who's waiting in a motel room for word from him so that they can run away together.

We're never exactly sure how much of Mud's story is being left out, and yet there's really nothing embellished about him. He speaks plainly. The problem is his own perceptions: Is he unable to see that Juniper isn't all she's cracked up to be? The mission of reuniting two lovers fills Ellis with a particular sense of purpose, seeing as his own parents' marriage is falling apart, and he's scorned in love by a girl himself. (The movie doesn't offer much in the way of good female role models: women are mostly disappointing in Mud.)

But the story is a powerful one, and the performances of McConaughey and the two young men are compelling. Writer-director Jeff Nichols eyes them with compassion without turning Mud into something sentimental. And he doesn't cheapen it by going for easy solutions to the various conflicts that arise. The characters in Mud feel very much a part of the world Nichols has created, or more accurately, procured: he adds to the mystique and the mythos of American life on the Mississippi. It's a wonderful film, and one of the most underrated this year.