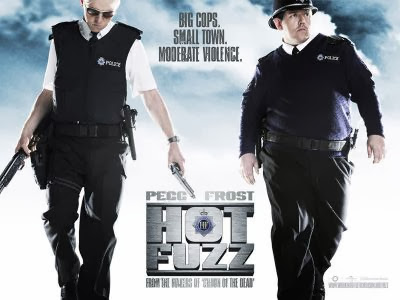 What the heck? I promised my friend that Hot Fuzz was the best of the Edgar Wright/Simon Pegg/Nick Frost genre comedies, but as we're sitting through the movie, I'm feeling the running time like I'm sitting in a waiting room, and I'm wondering why they thought it was a good idea to make Hot Fuzz two hours long. When I first saw this movie in theaters in 2007, I was absolutely enthralled with it. And I've seen it at least three times since (which would make the total viewings at least four now). Perhaps the problem is that all the tricks are known to me: the surprises are gone and I'm less inclined to be excited by the movie when I already know all that's going to unfold.

At any rate, my initial reaction to Hot Fuzz was extremely positive. My reaction tonight was mixed. I enjoyed the comic nuttiness of the plot, which is one part slasher film, one part buddy cop movie. And I'm constantly fascinated by Edgar Wright's visions of English culture. His London in Shaun of the Dead is a place where the people are pretty much zombies already, before the actual zombie apocalypse even hits. And Wright casts a decidedly cynical--if bizarrely affectionate--glow over English villages and villagers in Hot Fuzz and The World's End.

The plot involves a model police officer (Simon Pegg) who's transferred from London, where his track record for excellence threatens the mediocrity of his superiors, to a small village outside London called Sandford, a place where he will presumably be forgotten. But pretty soon he discovers that the seemingly peaceful, quiet little town is actually a hotbed of gruesome crimes and lots of other weird shit. He befriends one of the other cops there--a slovenly but lovable man-child played by Nick Frost, whose only interest in law enforcement stems from his obsession with cop movies like Point Break, Die Hard, Bad Boys II, and Lethal Weapon. The rest of the police force treats him with contentious disdain: he's an upstart trying to make too much out of the many "accidents" that keep occurring in Sandford. To reveal more would be unkind to the movie, which has some admittedly delicious plot twists.

I think the problem with Hot Fuzz is that the script, by director Wright and star Pegg, is too ambitious. There's just too much it wants to accomplish in its attempt to parody/pay homage to multiple genres. And yet, if it didn't give way to such excess, I don't think Hot Fuzz would have been as fun and exuberant the first time around. So in protection of my first opinion of the movie, I'll say that they shouldn't have changed a thing. Going by my impression at least four times in, I'd say the movie needed to be more compact.

There is so much cleverness that you'll likely miss much of it the first time. Just don't screw it up and watch Hot Fuzz too many times, or you may feel your love for it start to wane like mine did. The supporting cast includes Timothy Dalton, Jim Broadbent, Paddy Considine, Rafe Spall, Kevin Eldon, Karl Johnson, Olivia Colman, Bill Bailey, Edward Woodward, Billie Whitelaw, Eric Mason, Martin Freeman (whom I didn't notice the last time I watched this; now I immediately recognized him as Dr. Watson from that lovely BBC show Sherlock and as of course, the Hobbit), and Bill Nighy. ★★½ or ★★★
by Jacob Lusk @ pannedreview
Email ThisBlogThis!Share to TwitterShare to FacebookShare to Pinterest
Tags 2007, Bill Nighy, Billie Whitelaw, Edgar Wright, Edward Woodward, Jim Broadbent, Martin Freeman, Nick Frost, Simon Pegg, Timothy Dalton