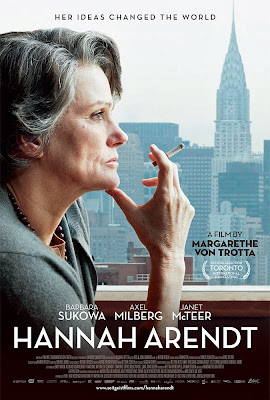 When German-Jewish writer Hannah Arendt (1906-1975) was sent to Jerusalem to cover the trial of Nazi colonel Adolf Eichmann, she was struck by the sheer banality of the man. To Arendt, Eichmann was a cog in a system designed for the purpose of committing unspeakable acts of evil with methodical, almost bureaucratic estrangement from conscience or morality.

As a biopic, Hannah Arendt is a masterpiece, starting with the performance of Barbara Sukowa as the indomitable Arendt. Sukowa plays her with dignity and restraint but also passion and vigor. The shitstorm that this woman seemingly brings on herself for speaking her mind and not backing down on her principles is quite fascinating to watch. Once Arendt's piece on the trial is published in The New Yorker, friends turn on her, colleagues asked her to resign, Israeli government men threaten her, and the hate mail comes in at a breathless rate.

Director Margarethe von Trotta (who wrote the screenplay with Pam Katz) manages to capture the sort of rambunctious intellectual life of the expatriate Jews living in New York (some of them victims of the death camps themselves, all of them displaced but embracing their new life in the States). There are lots of impassioned conversations over wine and cigarettes, switching from German to English and back to German again. Despite even the criticism of those closest to her, Arendt never backs down from her belief that Eichmann should be tried as a man, not a representation for an idea. It's a complicated thought once you consider the emotional wallop of six million souls lost to that particular idea. But this is a smart movie that has the courage to present its hero and her ideas without laundering them.

The supporting cast is equally good: Janet McTeer as the writer Mary McCarthy (she's a hoot), Nicholas Woodeson as New Yorker editor Bill Shawn, Axel Milberg as Arendt's devoted husband (also an intellectual), Julia Jentsch as her assistant, Ulrich Noethen, Michael Degen, Harvey Friedman, Megan Gay, and Klaus Pohl as philosopher Martin Heidegger, who taught Arendt how to think, and who apparently let her down in a profound way when he expressed accord with Hitler. ★★★½