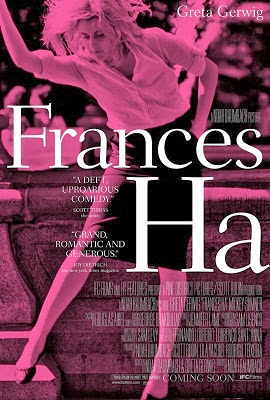 Frances Ha is a delight, alternately heartbreaking and funny, about one of the worst things in the whole world: people in their 20s. There are moments and lines of dialogue in writer-director Noah Baumbach's script that are so subtly clever you have only a vague idea that they might be little hidden diamonds awaiting re-discovery.

The titular character, Frances, is played with daffy aplomb by the lovely, tall, tentative looking Greta Gerwig (the 'Ha' is short for her last name, Halladay). Frances is a girl who, for all intents and purposes, cannot get her shit together. She has no filter on her speech, and she doesn't have a knack for reading social cues. Frances lives in New York with her best friend from college, Sophie (Mickey Sumner), but Sophie wants to move to an apartment in Tribeca and Frances can't afford it. Also, Sophie has a boyfriend nicknamed Patch (Patrick Heusinger), and they make fun of him but Sophie likes him more than she's willing to let on. Frances meanwhile, is in a stilted relationship that's on its last leg. She's also struggling to maintain her dream of being a professional dancer, as the company she's aspiring to has only admitted her as an apprentice.

Yes, there's a point in Frances Ha where you think: this may be the most depressing movie I've chosen to watch in a long time. And it's in black-and-white. Is there anything more disgustingly hipster than a black-and-white movie about New York City in 2013?  But it's not! It's a movie that makes you feel that even in the worst of circumstances, even when you're such a total screw-up that you seem to be clueless to your own self-sabotaging, there is hope. Things can get better. I really loved it. The performances were lovely, and it was nice to see a movie that didn't treat its down-on-her-luck heroine with contempt. (There are moments when you want to cry for Frances, or smack her, or both. But you always root for her.)