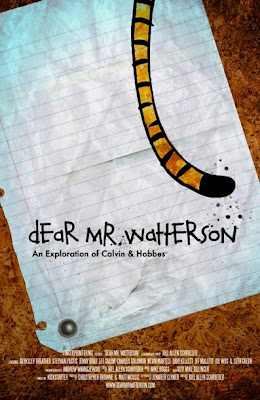 Dear Mr. Watterson is a highly personal documentary directed by Joel Allen Schroeder, virtually a lifelong reader and fan of the popular comic strip Calvin and Hobbes, which was created by Bill Watterson. I have read very little of Calvin and Hobbes--and was generally not that interested in doing so based on what little exposure I did have to the strip--and I was worried that Dear Mr. Watterson would be a gushy fanboy's exercise in hero worship. It is, to a large degree. Schroeder takes us to his childhood home in Wisconsin and shows us his old bedroom, describing the wall that was once covered from floor to ceiling in Calvin and Hobbes clippings. But his documentary thankfully goes beyond that singular worship, touching on the wonderfully fascinating nature of creativity itself, as well as the apparently controversial decisions of Bill Watterson, who retired the strip after 10 years (a decidedly short run for a comic strip, since Blondie has been in print for over eighty years).

Watterson became something of a recluse in 1995 after issuing the final entry of his comic strip. He also refused to let his work into the hands of merchandising companies, thus barring devotees from ever owning a Calvin and Hobbes stuffed animal, Calvin and Hobbes lunch box, Calvin and Hobbes coffee cup, bottle opener, leg warmer, sweat band, card deck, purse, underwear, etc. (Some of the people who contributed to the documentary were clearly emotionally traumatized by this decision to deprive them of such products.) But despite its rather fanboy-esque theme, Dear Mr. Watterson is a fairly engaging and intriguing documentary. That's due in part because of the quality the guests who speak eloquently of Calvin and Hobbes' impact on the industry. It's also bolstered by the fervent admiration of the devoted readers who grew up with this "little" comic book character with a big love for exploring and imagining the world. (The cartoonist's wit and skill are well-showcased.)

There's also some talk of the divide between high and low art--I suppose comic strip fans want their comics to be considered on the same level as opera?--but I say: embrace the lowness of low art. Don't try and re-define the parameters of high art to include all the things that are not in fact high. That's the whole point of low art: it fulfills us in different ways than opera and things like that. And there's absolutely nothing wrong with it.

But the problem with this movie is that it's not really interesting enough to be a documentary. There's little at stake. Perhaps an encounter with the man himself would have livened things up. I kept thinking, "I wish someone would make a documentary about Debbie Harry like this." But then I changed my mind. Not if it's just fan worship. Only if there's a real story to tell. Documentaries are stories just like narrative film, and the good ones don't forget that. This one feels like it needed to be re-imagined. ★★
by Jacob Lusk @ pannedreview
Email ThisBlogThis!Share to TwitterShare to FacebookShare to Pinterest
Tags 2013, Joel Allen Schroeder