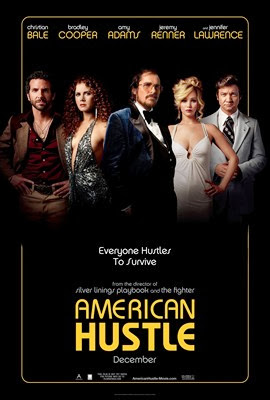 Watching American Hustle is like watching three different train wrecks happen at once, and yet there is an element of control involved that would distinguish it from an actual train wreck. First and foremost, it's a comic film that yearns to have been made in the late 70s, which is when it's set. The period detail is as conspicuous as the hair of the women in the movie, from the carefully chosen music to the glossy retro Columbia Pictures logo that plays at the beginning of the movie. That's part of the trouble: American Hustle feels too manufactured, and as such the story falters a lot. The script by Eric Warren Singer and David O. Russell (he also directed) is self-consciously a crime-comedy. Movies of this kind from the actual 70s weren't self-conscious. They just were. You begin to miss this element in American Hustle, because it always feels like a put-on.

But there are redeeming qualities, such as the magnificent cast: Christian Bale as a con artist with a deluxe comb-over and a striking little gut that compliments his even more striking fashion sense; Amy Adams as his mistress/cohort, a gal who affects an English accent in order to dupe clients; Bradley Cooper as a cop who's looking to get a promotion; Jennifer Lawrence as Bale's hard-drinking, hilariously out-of-control wife, who has a big nest of hair atop her head; and Jeremy Renner, a naive, well-intentioned mayor from New Jersey, who unwittingly becomes part of the cop's plan to entrap a bunch of politicians and mobsters.

David O. Russell's brand of comedy is hard to take sometimes. He's big on letting his characters ramble their way to a point, and you really miss clever, quick, flashy dialogue when that happens. On the other hand, there are some pretty funny lines in American Hustle, and many of them fall out of Lawrence's mouth like little flecks of verbal dynamite. Half the time you aren't aware of how funny they are, and just how loopy her character is. She really colors the film.

Bale is appropriately pathetic-looking as a lifelong scammer, he of the hyper-real performance. (I'm quite prepared to believe that he put on weight so he could have a real belly.) The movie doesn't take him too seriously, but it also doesn't completely dismiss him, which feels like loyalty on its own terms. Bradley Cooper, on the other hand, is always some degree of Bradley Cooper. (His character wears curlers at night, which is a good example of how the film can be uproariously funny when it wants to be.) They do play off each other well.

The overall results for me, were mixed. There were moments I laughed loud and long, and moments where I felt bored by what seemed like deliberate chaos. It's a whirlwind of a movie, and admittedly a well-made one. Linus Sandgren was the director of photography. His work is solid: American Hustle has panache and charm and sexy camera angles to spare. But there is something hollow inside of it, like director David Russell was grasping at becoming the next Coppola or Scorcese, and not quite hard enough. With Elisabeth Röhm, Robert De Niro, Jack Huston, Louis C.K., Alessandro Nivola, and Colleen Camp. ★★½
by Jacob Lusk @ pannedreview
Email ThisBlogThis!Share to TwitterShare to FacebookShare to Pinterest
Tags 2013, Alessandro Nivola, Amy Adams, Bradley Cooper, Christian Bale, Colleen Camp, David O. Russell, Elisabeth Röhm, Jack Huston, Jennifer Lawrence, Jeremy Renner, Louis C.K., Robert De Niro