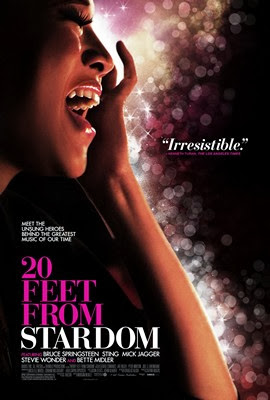 What an exuberant movie. 20 Feet From Stardom makes you feel like music is the only thing in the world that really matters. It's a triumphant, glory-hallelujah kind of documentary, and probably the movie I've been looking forward to the most this year, ever since I happened to catch an interview with Merry Clayton on Fresh Air. The reason I even know who Merry Clayton is is because I'm a huge fan of the movie Maid to Order, a 1987 comedy starring Ally Sheedy as a spoiled brat who gets turned into a maid working for an eccentric L.A. music producer and his equally loony wife. One of their other staff members is an ex-girl group singer played by Merry Clayton, and she even sings a couple songs during the course of the movie.

The part was, as it turns out, more than a little autobiographical for Merry Clayton and some of the other background singers like Darlene Love (who really was forced to clean houses at one point in her life, despite being a stunning talent). That's what 20 Feet From Stardom is about: the journey of these women (mostly black), who had more talent than could be borne, and were in some ways screwed over by the music industry. But this isn't a downbeat or a complaining film. The ladies are realistic about the fact that for many of them stardom was ever only on the periphery. But they're also very direct about wanting that success and regretting that it didn't happen.

It is truly wonderful--and long overdue--to discover how much Clayton and Love and a number of other girls had to do with the success of some of the great songs of the 60s, 70s and 80s. (And many if them are still working today, albeit more sporadically, as jobs for singers have diminished over time.) Merry Clayton's the gut-wrenchingly powerful female voice you hear on the Rolling Stones' song "Gimme Shelter." Darlene Love can be heard first on "He's A Rebel," although she wasn't credited for it at the time. Claudia Lennear sang background with Ike and Tina Turner. Lynn Mabry with the Talking Heads. Lisa Fischer has toured with the Stones since 1989. Judith Hill sang with Michael Jackson. There are many others mentioned, some perhaps too briefly, but overall you get the feeling that the music industry has kept these jewels hidden from the world. And yet sometimes the impression is that it just wasn't in the cards for them.

This is perhaps a blessing in disguise.

Tata Vega puts it best: "I probably wouldn't be sitting in this chair talking to you right now, because I would have [overdosed] somewhere."

20 Feet From Stardom explores the elusive, heart-breaking, exuberant, ephemeral nature of fame, and the richer, more life-giving nature of the power of music, which for some is the thing that really matters. It's an apt reminder--because so many people are hungry to be famous--that superstardom isn't going to solve anyone's problems, and isn't necessarily the definition of true success. Sometimes it shuts down the talent and emphasizes things that aren't really important.